The first two visits in June were both to Broad Oak farm. The walks covered several habitats including arable land near to the cricket field where there were several species of grass, the banks of the River Torne, a wildlife pond created 15 years ago , fallow arable land adjacent to the River Torne and the farmyard itself. The visits were highly successful and it was suggested that we return next year when hopefully there won’t be any restrictions in visitor numbers .

The first visit was led by Caroline Barrass with recording by Colin Howes on the 9th of June, with the second visit, also being led by Caroline Barras, with recording by Carol Benson on the 17th of June. If you’re interested in a full list, please consult the website. Caroline Barrass took this photo of Jim Burnett and Colin Howes in the middle of the arable land near to the pond, surrounded by poppies and Anna Thirlwell took the photograph of the male Damoiselle damselfly which were very common along the banks of the Torne. 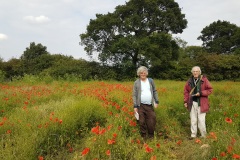 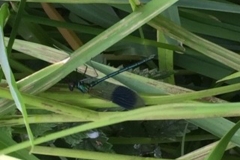 On the 24th of June, on one of the hotter days, we ventured to the RSPB Reserve at Fairburn Ings where there is a mixture of habitats. Joyce, Gill and I took a path through the woodland to avoid being out in the midday sun and eventually reached one of the viewing points overlooking the water where we had lunch. The rest of the party headed towards the more open part of the reserve where spoonbills have been nesting for several years. A variety of other species of birds were recorded by Paul Simmons. 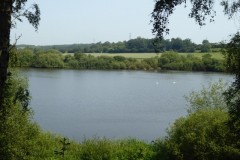 The next visit was to Brockadale on July 2nd, led by Paul and Joyce Simmons. As you probably know, Brockadale is a Yorkshire Wildlife Trust site on magnesium limestone and in the past has been the venue for Butterfly walks, specifically to look for Dark Green Fritillary and Marbled White. We weren’t disappointed. Here are photos of both. The first is the underside of a Dark Green Fritillary taken by me and the second a male Marbled White taken by Joyce Simmons. It’s also a fantastic reserve for plants including Giant Bellflower, Musk Thistle and Meadow Cranesbill.
For a full list of species recorded see the website. 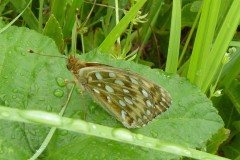 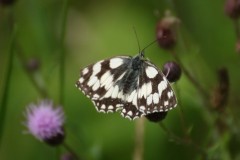 Three days later, on the 5th of July, we were led round Thorpe Marsh by Mick Townsend. During this visit we saw, amongst many other species, the bug Deraeocoris ruber. 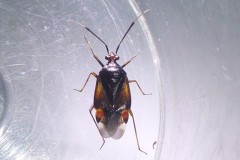 We also found Lesser Reed Mace or Lesser Bulrush Typha angustifolia. This plant has a more slender, paler brown female flower-spike than Bulrush Typha latifolia, and the female spike is separated from the male spike by a 3-8cm gap on the stem, as can be seen in the next photograph. 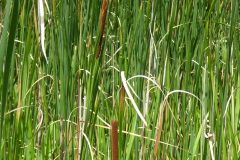 The nextphotograph shows Applehurst pond, where there were large patches of beautiful yellow waterlilies. If you want to see a list of dragonflies, damselflies and other insects recorded on the  day, please refer to the website. 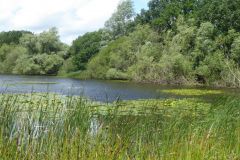 Later in July on the 11 we visited the River Torne Washlands, a visit which was on the programme but with a change of leader from Louise Hill to John Scott. The site was accessed via Toad Holes Lane at Rossington from where we investigated the flood plain and banks of the Torne, including the wetland area between the cycle way and Mother Drain.  Once again Colin Howes was the recorder and he subsequently produced a very detailed report which you can find on the website. Of note were the sawfly larvae of Nomatus septentrionalis ( determined by Ian Andrews) on Hazel leaves. If you’re looking for a local site to visit this one is particularly interesting. 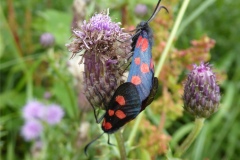 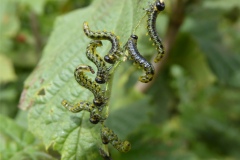 Just over a week later on the 20th of July we visited Bentley Community Woodland. Again Colin Howes created a report including a species list which you can find in full on the website, but here is an extract. “The site is potentially species rich and is a remarkable local example of habitat creation”. Notable species were Spiny Restharrow Ononis spinosa found by Joyce Simmons, this being the only known modern Doncaster record. 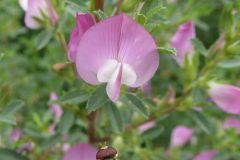 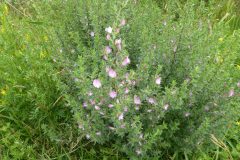 Another species of note was Dyer’s Greenweed Genista tinctorial which occurs in profusion adjacent to the Shaftholme Lake and probably represents the largest population in the Doncaster region. The Essex Skipper butterfly, a recent immigrant from the south, was very well represented and numerous other insects were discovered, including the Lesser Marsh Grasshopper Chorthippus albomarginatus, which was photographed by Joyce Simmons. 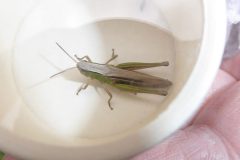 Our thanks go to Paul and Joyce Simmons for their efforts in recording insects in the field, contacting YNU recorders for confirmation of the identity of unknown insects and for compiling lists to be sent to Louise Hill and eventually Bob Marsh. Also to Colin Howes for his extensive recording and compiling lists of species found, many of which are on the website, to Les Coe for taking the time to keep the website up to date, incorporating Member’s Projects and Colin’s detailed reports, Margaret Prior for keeping you all informed of the situation regarding outdoor meetings and all other members who have assisted in identification of species, contributed to the website, attended outdoor meetings or who have acted as leaders. 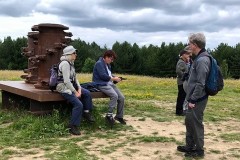 I trust you all have someone to help support you in your endeavours during this challenging times and you are still finding time to continue your love of nature in your own way.

Shortly, we will be making a decision about the Winter Program which won’t include indoor meetings, as Parklands is currently closed, and there is no suggestion as to when it will reopen.