The first of the indoor meetings took place on Wednesday 3rd of October at Doncaster Museum with a power point presentation entitled “Spouting Whales of Yorkshire” delivered by Colin Howes. Colin impressed us with the amount of knowledge he had accumulated on the incidence of Cetaceans found off the coast of Yorkshire and even up some of the tidal rivers, such as the Don, which allowed Maritime species to swim up occasionally. Such records, collected by individuals and Societies, have taken years to collate. The Seawatch foundation have recorded 27 species of Cetaceans seen on the Yorkshire Coast. Colin talked briefly about many species, showing photographs and dates of sightings.

Our annual review of the summer on October 17th was slightly different this year. Instead of watching all the photos taken by an individual throughout the summer and then moving on to those taken by another member, Louise put all the contributions in date order and we looked at various people’s recollections of each meeting which I think was more interesting. Most of the photos reflected the summer meetings which were covered in the Summer Newsletter but Margaret Prior showed us some she had taken on the fungus foray at Brockadale.
Below left: Collared parachute Mushroom Marasmius rotula and Below right: Honey Fungus Armillaria mellea 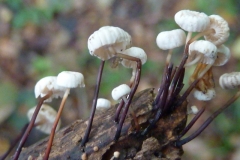 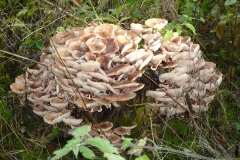 The second meeting at the museum was a talk by Roseanna Burton who is the Community Officer for the Dearne Valley Landscape Partnership, which is a 5 year Lottery funded project in its final year. She talked about the many ways in which the project has been working to benefit the community, including training the next generation of Naturalists with the Sorby Natural History Society. They arranged 80 specialist recording days and 50 Wildlife Day training workshops including ones on such topics as Fungi, Bees, Hoverflies, Grasses and Mammals.They looked at under recorded areas of reptiles, first training up individuals to carry out surveys. In fact they arranged a lot of volunteer surveys to increase records so that they could put forward cases for retention of certain sites. They also are working with Northern Rail to manage biodiversity. The company had no records of species present on their stations so volunteers met at 8 stations in South Yorkshire to provide data and records they could use. Margaret Prior and myself assisted in the recording of species at Swinton.  Among all the work they have been involved in one of their successes is the sharing of skills by various volunteer groups.

A short expedition on the banks of the River Torn on November the 16th by 4 NATS members looking for Harvest mice nests resulted in the discovery of 4 nests in amongst Phragmites australis. 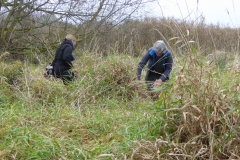 Paul and Joyce Simmons presented the third talk at Doncaster Museum, entitled “Butterflies of Britain and Beyond”, on December 5th. Joyce started by showing photos of four Lepidoptera, all of which looked superficially like butterflies but on closer inspection of their antennae three turned out to be moths. The butterfly had clubbed antennae and the others which were moths had various shaped antennae which weren’t clubbed. She then continued to tell us some information about the group of butterflies which have three pairs of walking legs. Of particular interest was her reference to the relationship between the Large Blue and red ants. In the second half of the presentation Paul talked about Brushfooted butterflies which have two pairs of legs, which they use for standing, and a third pair which are modified and often have a brush like set of hairs, hence their name Brush-footed. This group of butterflies, represent the largest and most diverse family of Lepidoptera and include, admirals, monarchs and fritillaries. Both Paul and Joyce talked about the habitat of species, their food plants, their habits and environmental factors determining their success. As usual, the photos used were excellent. A lively discussion followed the talk. 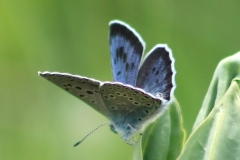 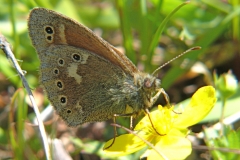 The annual quiz, set by Dave Williamson, took place later on in December at Parklands and was won by Joyce Simmons. We thank Dave and his wife Sue for their contribution to the program. The quiz was thoroughly enjoyed by all.

Moving on to January, our New Year’s walk which took place at Adwick Washlands was led by Catherine Palmer. This is an RSPB reserve in the Dearne Valley so the main topic of interest was birds. In the relatively short time we were there we managed to see 23 species, including a female Sparrowhawk. Catherine told us that in the summer the reserve was a brilliant site for Banded Demoiselles and butterflies so we have scheduled another visit on July 13th.

On 26th of January the Annual General Meeting took place as usual at Potteric Carr. This year we opted to use the room at the top end of the cafe since our experience of using the classroom in the old visitor’s centre last year was a cold one! The early start enabled us to finish the meeting shortly after 11.30 so we could have a leisurely lunch and still have time for a walk on the reserve. The number of attendees was down on last year and we had several apologies from members who were unable to attend. In the fullness of time Derek will write out his notes and I will precis them in order to inform the membership of decisions made.

After lunch we walked down towards the Duchess Hide and then on discovering that a bittern had been sighted at Piper Marsh we headed off to try our luck. Unfortunately we weren’t successful. Returning to the cafe for a well earned piece of cake we discovered that the Starling murmuration had been seen in front of the visitor’s centre round about 4.30 so we decided to wait and try our luck again. This time we were rewarded when the murmuration began round about the predicted time. We watched the magnificent swirling backwards and forwards of the starlings until they set down round 5 o’clock when it was time to lock up the centre. All in all it was a perfect day.

Our first afternoon at Parklands Social Club took place on the 6th of February with a presentation by Paul and Joyce Simmons entitled “Brazil”. We were shown photographs of the wildlife they encountered on their treck through the rainforest including some examples of species similar to those found in the U.K. such as the American Painted Lady, Streaked Flycatcher and Sunbittern. Of note also a Toco Tucan which was used in the original Guiness advertisement and a Hyacinth Macaw which is the heaviest of parrots with a beak strong enough to eat Brazil nuts.

The second meeting in February took place at the home of Doncaster Movie Makers where we had our annual joint meeting. Charlie Lee, of the Movie Makers, created a compilation of movies for us including one filmed by Marc Seccombe in 2005, the 125th anniversary of Doncaster Naturalists’ Society, featuring Colin Howes, Dorothy Bramley, Peter Skidmore and Louise Hill and “Back to the Bog” a movie about Hatfield Moors filmed by a group of the Movie Makers. After the food interval Tim Prosser showed two movies created by Jeff and Margaret Prior, two by himself and Louise Hill and one by Joyce and Paul Simmons featuring animals caught on camera at night at Brockadale. For me the best was kept until last. This was a film edited by Nigel Birkinshaw starring a pair of goldfinches raising their chicks in a nest in Nigel’s garden. Again we had a thoroughly enjoyable evening of Natural History, Record and Humour .

Our first meeting in March on the 6th was an illustrated talk by Bob Croxton entitled “South Yorkshire’s changing landscape” Using old and modern photographs, Bob illustrated his description of the changes which have occurred over the past decade in South Yorkshire and Derbyshire, some of them for the better such as Cranes nesting again on Thorne Moor and some negatives such as the loss of Nightingales in Rotherham and Barnsley. Some of the photographs were of colliery sites where mining took place such as Orgreave in the Rotherham area. Louise pointed out the value of old photographs which show changes in vegetation and land cover.

The penultimate indoor meeting took place on Wed 20th of March with quite a few apologies resulting in the smallest attendance we’ve had for a long time. The topic for this evening was for members to share something which might be of interest for the group. My presentation was related to the recording of Hoverflies. The idea came after the Natural History day at Treeton when Derek Whiteley , the Sorby Invertebrate Group Secretary, remarked that Diptera were very much unrecorded. Louise and I thought that it would be a good idea to come up with an initiative to encourage our members to participate more in recording and since I had a slight interest in hoverflies I thought we could look at the identification features then try to learn to identify several of the more common species. Derek allowed us to show his Powerpoint presentation which included 8 common species and I chose 4 which I thought we could all look out for. 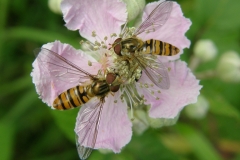 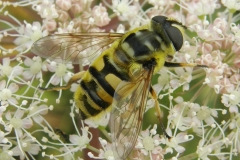 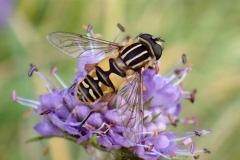 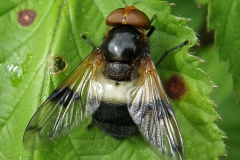 Louise and Tim then showed us some photographs which were taken showing devastation caused by a tornado which occurred on March 10th. One in particular showed a pile of rubble which was originally a barn built in 1850. Most of the damage involved house roofs and trees. 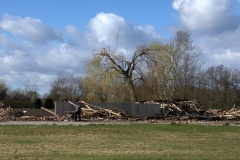 We concluded with a brief discussion about the Summer program.