The first outdoor meeting on our summer program to Hayfield Flats Plantation, a short walk from Hayfield Lane, was attended by 7 members. The floor of the wood was littered with rotting trunks and branches of birch trees many bearing several horses’ hoof fungi. Other fungi were discovered, notably Jelly Ear and Witches’ Butter (see photo below). 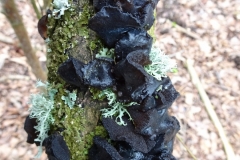 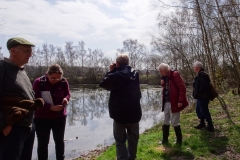 Among the spring flowers growing were wood anemone, primrose, oxalis and cowslips. We crossed the main road and sat beside the lake for lunch (see blow the reflection of trees and the group getting ready to walk back to the cars.) This wood is easily accessible by car or public transport with only a short walk from the main road and his well worth a visit.
22nd April – Dunsville Quarry Park

Three members joined Friends of Dunsville Quarry Park with the intention of giving some guidance in monitoring vegetation using quadrants. The group had already decided on the location of the quadrats which were in 3 different habitats. Louise gave them some sheets designed to assist in assessing the percentage cover of species which is what they were intending to do and we identified many of the species present in each quadrat. The group took photographs of species which were still in leaf so they could later refer to their books in order to familiarise themselves with their identification when they came into flower. They were all very keen to learn as much as possible. In between quadrats the group showed us where they had planted large groups of bluebells. The group showed their appreciation by donating £65 to our funds.

Several members joined the YNU on this visit to Thorne Moors. This report and photographs by Joyce Simmons.
“The weather was perfect, sunny and warm but with not too many biting insects. Dragonflies were everywhere, and Hobbies chased and caught them with aerial grace. It was a bit early in the year for plant growth but we managed to find Bog Rosemary, Cranberry and Royal Fern. To find many of these we needed to leave the path, a risky business, but only Louise managed to fill her welly with peaty water. Unusual moths included a chocolate tip, and flamboyant larvae of Scarce Vapourer found on Sallow.”

Again, this report and photographs by Joyce Simmons.
“This was an away day to the wolds on a beautiful spring day. We met at Martin Stringer’s farm at Nunburnholme where we were entertained with coffee and a tour of Martin’s interesting garden. This was followed by a walk in his meadow where we estimated an orchid population of over 1000. These were mainly large hybrid orchids, in their prime. Dave and Paul swept the grassland and marshy areas with their nets and Paul caught a Tortoise Shield bug. This has been confirmed but very surprisingly the nearest record for this is south of the washes so that was an excellent record. A Barn owl left the nest box as we passed and Willow Tits were heard near their nest site. The afternoon visit to Fordon Bank yielded several butterfly species including the increasingly scarce Wall Brown. The main object, Green -winged Orchids were in prime condition, with several colour variants in the enclosed area, free from sheep grazing.”

This was a botanical visit to a Carstairs Trust reserve with a trustee. The woodland around the pool is distinctly primeval, with fallen trees and tangled vegetation. However, the weather was anything but perfect. It poured on us, so everyone was somewhat soggy by the end of the visit. We did manage to find Marsh Fern and Water Dock, I suppose their names give a clue to the kind of terrain!

A NATS walk in this woodland was not very productive, but the grassland beside the wood was more interesting for insects. Tree and White-tailed bumblebees were feeding on thistles along with lots of 5 spot Burnett moths.

An evening visit to John Scott’s farm failed to find Forester moths though John had seen two a few days before. We were looking in one of the meadows where I found it quite a struggle to make my way . Despite the absence of the Forester moths we did find examples of Straw Dot and Meadow Brown. Several grasses were in flower including Creeping Bent Agrostis stolonifera, Tufted Hair-grass Deschampsia caespitosa and Marsh foxtail Alopecurus geniculatus. When walking round the small pond at the edge of one of the meadows we found Hairy sedge Carex hirta and tassel galls on Jointed sedge. (See below) 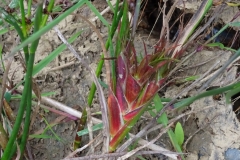 This was a joint meeting with the South Yorkshire Botany Group and a full report written by Les Coe is available at southyorkshirebotany.blogspot.com

This report and photos by Joyce Simmons. “The day was very hot, which was a disadvantage as we were in the part of the reserve where it usually would have been boggy. The dry weather was however taking its toll. We did find Fen Bedstraw which needs boggy alkaline conditions, and splendidly huge specimens of Royal Fern.  We watched numerous damselflies, with mating pairs of Azure Damsels as we had lunch by the pool, but saw no water voles which would have been seen previously.”

This meeting was only attended by John Scott and Louise. They surveyed some of ponds by the canal.

This was another joint meeting with the South Yorkshire Botany group and again a very detailed report thanks to Les Coe appears at southyorkshirebotany.blogspot.com.

7 Members attended this event. As usual it was a good day though a little warm.

Report and photographs by Joyce Simmons. “This was a re-arrangement from the advertised program to check for purple Hairstreak butterflies. We managed to see around 70, which is not a record but indicative of a very healthy population. We set up our moth traps, anticipating the usual abundance of Thorpe Marsh moths. Harry Beaumont brought his mercury vapour trap to join us. Things were going well until around 11 pm when a very sudden downpour put an end to the fun. Everything was immediately soaked and so the promising session was brought to an end.

This report by Louise Hill. “Five members attended this meeting. We had a nice brisk walk but it was very windy and all the non-botanical wildlife was hunkered down and invisible. The one thing of note was a recent fish kill in the river.”

This was another joint meeting with South Yorkshire Botany Group. This time to the naturally re-vegetated
steelworks tip beside Treeton Dyke where there is a variety of habitats. Again, Les Coe
has reported this in detail.

Five members met at the bottom of Broad Balk Lane which leads up to Hampole Wood. None of us were familiar with the route but looking at the map a walk down the lane and round the wood looked straight forward. This turned out not to be the case because we missed the footpath leading up to the wood even though we could see it clearly on the map. The most interesting part of the walk was into the edge of a field where there were a lot of creeping thistles still in flower providing nectar to a variety of bees and butterflies. We spent some time watching and photographing a Picture Winged fly (see below left) and a Field Cuckoo Bumblebee. We also found a few lime trees whose leaves were distorted by what we thought might be a gall (see below right) but on consulting Margaret Redfern’s identification guide we couldn’t find anything which fitted the description. Tom Higginbottom will show the photograph to other members of the British Plant gall Society to find out if they recognise the distortion. Have any of you any idea what might have caused the edges of the leaf to gather up in such a way? 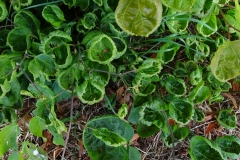 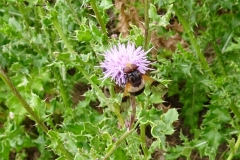 This was an impromptu meeting at Austerfield organised by Mick Townsend. Harry Beaumont joined us with his mercury vapour trap which attracted a good number of species. In all, five moth traps were in operation including both actinic and mercury vapour. Moth counts were quite low initially but as the evening progressed the numbers increased.

Seven members attended this event. The staff of the park had organised varies activities for the public, including bug hunting. We were based in one of the Education classrooms and next door they created a display area of natural history items found in the park, to which we contributed. We also surveyed several areas, the first being the pieces of land adjacent to the Polar bear’s enclosure. While we were listing species, Paul was quite close to the fence with his net trying to catch butterflies when one of the polar bears caught sight of him and came bounding over to investigate. The park official immediately asked us to vacate the area because the bears were not used to seeing anyone on that side of the enclosure. Good job the fence was secure!

Ken Woolley
As you know Ken sadly passed away in June. Several members of the NATS attended his funeral at Rose Hill cemetery. The eulogy was very moving, celebrating his life and love of nature and family. I recently bumped into Collette, his widow, and she told me that over £400 pounds was collected and sent as a donation to Butterfly Conservation in his memory. She also indicated that she would be pleased to allow us to use some of his photographs in our next edition of the Doncaster Naturalist which we intend to be a memorial edition. We shall miss his photographic contributions to indoor meetings at Parklands. Any ideas for honouring his memory would be welcome. Paul Simmons has said that any other contributions to the next edition would also be welcome.

We are aware that the outdoor meetings are not as well attended as the indoor meetings and wonder if there are any changes to the Summer Program which would make the field trips more attractive whether it be the location of the meetings, their focus, the starting time, the length of time the meetings last etc. We will bring this subject up again at the AGM so you have time to consider your response but if you have any immediate thoughts send them to me and I will save them for use at the AGM.