This is the first newsletter since Les Coe created our new website. Thank you to Les for all the time he has put in, both creating the website and keeping it up to date. Those of you who have looked at the site will know that in many cases reports for some of our meetings are publicised online fairly soon after the event, sometimes in quite a lot of detail. There are some gaps, however and if you would like to read about every meeting, in future we would be looking for
contributions from the membership besides Louise, Mick Townsend and myself. As you will see Mick has written a report for the early meeting at Thorpe Marsh and Louise and I have written all the others.

Most of you who receive this letter by e mail will have also access to the website and so if you have been referring to the meeting reports, you will find very little difference to the content of this newsletter. I have considered whether we need both but for this edition at least and until I discuss this with the committee and other members I will keep the format the same as usual mainly for those who don’t have e mail. Please continue reading the next paragraph even if you have been reading reports online.

As you will see from the Winter Program we are holding all our indoor meetings at Parklands Social Club on Wheatley Hall Rd. This is because the museum is closed on Wednesdays in preparation for the move to the new building on the site which was formerly the Girls’ Grammar School.

For anyone who is not familiar with Parklands it has a reasonably large car park, refreshments are available and timing arrangements are more relaxed than at the museum so we are not watching the clock towards the end of the meetings. With a short walk it is also accessible by public transport, the nearest stop being Oversley Road Stop ID7040769 on the Becket Rd bus route No 15a. Walk from the stop down Harrowden Road and across Wheatley Hall Road at the pedestrian crossing outside the Peugeot Garage. NB There is a pedestrian gate directly into the car park off the
pavement on Wheatley Hall Road. Do come along and try the venue if you haven’t already done so.

Again, referring to the Winter program, our long term arrangement with Doncaster Movie Makers continues and we are looking for contributions from members for our half of the program. These could be short videos or a slideshow with or without commentary, using still photographs. Please let Pip know if you have something suitable.

The visit to the racecourse was cut short since it was quite exposed and it was windy and cold. Four of us Louise, John Scott, Colin Howes and myself met at the edge of the racecourse. One of the species we were looking for was Petty Whin which had previously been recorded on the site in several places. We did find it present in one of them but not in another. However, Louise did come across Pill sedge (Carex pilulifera) and Green-ribbed Sedge (Carex binervis).
Nora Boyle. 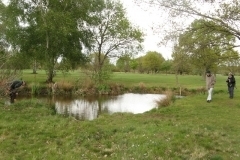 Back Wood is part of Warren Wood and consists mainly of oak trees, many of which have multiple burrs on their trunks. Burrs are masses of shoot and bud tissue which have grown to form a distinctly knobbly trunk. They usually form over a wound, which could be caused by a variety of factors, thereby protecting the tree from further damage at that site. The photograph below shows a typical example. We walked round the wood and then followed a path to the left of Manor Farm Estate where there was a sustainable urban drainage pond created to take excess water from the estate and managed by the Yorkshire Wildlife Trust. Across both sites we either saw or heard 9 species of birds. We identified two species of fungi ,one gall 2 insects. Finally we saw some rabbits.
Nora Boyle 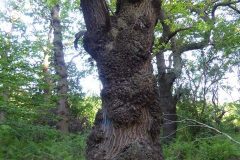 Although we saw many species of plants on these reserves our main focus for the day was birds. The highlight of the visit to Fairburn Ings was seeing the Spoonbills, even though they were a long way in the distance. After lunch we left Fairburn and traveled to St Aidan’s reserve about 10 minutes drive away. There we were directed to a tall post near the Visitor’s centre, at the top of which was a little owl. We then split into two groups to investigate the reserve. One took a shorter route round the meadow which was bordered by impressive plants of Black Mustard (see below). The other group took a longer route where they saw a variety of birds, in particular a good number of lapwing, Reed Bunting and nesting Black-headed gulls. At the end of an excellent day we had an impressive list of 58 species of birds. 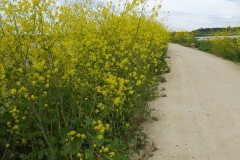 Bempton is home to the largest mainland Gannetry and thousands of other seabirds, notably puffins, guillemots, razorbills, kittiwakes and fulmars. Four of us travelled in one car arriving just before lunchtime. After lunch we investigated the viewing areas to the north of the centre where we observed the different species of birds in their chosen nesting spots and compared the two auks which people tend to get confused with ie guillemots and razorbills. Later in the afternoon we walked south of the centre towards the gannetry (where the closed circuit cctv camera was installed) and had a wonderful couple of hours watching gannets collecting nesting material and landing and taking off from a ledge at the top of the cliffs. They were so close we didn’t really need binoculars. We were so absorbed that by the time we reached the visitor’s centre it had closed.
Nora Boyle. 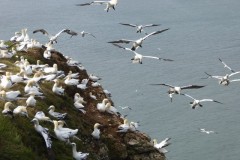 The group met at the shingle beach near the end of Lakeside Boulevarde and headed straight for the island, recording a variety of wildlife as usual. Of note there was a lone fig tree growing on the edge of the lake, a small tree whose beaches were covered in scale insect and several orchids including many examples of Broad leaved Helleborine. Several birds were raising their young including coot and mallard.

After investigating the island we walked back towards the hill created by remodelling the old Municipal Tip. On several grass stems we found the empty cocoons of Narrow – Bordered Five Spot Burnett and several moths which had emerged. At the time I didn’t know which of the two five spot burnets we were finding but on reading the latest YNU publication I discovered that Five Spot Burnett doesn’t fly in Yorkshire so they must be Narrow- Bordered. We left as the light was fading, having recorded 20 birds and numerous plants.
Nora Boyle. 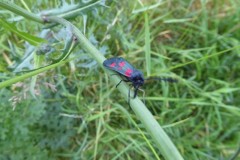 We had a prime spot at the courtyard entrance where it was relatively cool being shaded by the trees on one side. Surprisingly there were no biting insects bothering us. We had quite a lot of interest in the stall but only one attendee on the walk. Perhaps it was too warm.
Louise Hill. 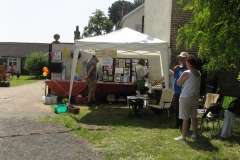 Six attendees had a leisurely stroll along the Dearne where they spotted two or three plants of the invasive alien species Giant Hogweed growing on the far bank before heading for the viewpoint in the middle of the reserve. We then backtracked to the main Bridleway and did a clockwise circuit of the perimeter. On our travels we found an odd looking Goat’s- beard plant. John Scot suspected it might be the less common subspecies Tragopogon pratensis subs.pratensis, but the jury is still out on that one. We saw plenty of ladybirds and overflies, and also family parties of pied wagtails and lapwing feeding on the damp muddy grasslands. Afterwards, a small group went to look at Owston Meadows. Betony was in full flower. The Meadow was cut the following week.
Louise Hill. 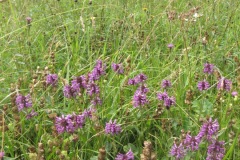 Six members met up in the car park next to Hollicars Holiday Park at Escrick. We then met up with Rosalind Forbes whose family owns the land and she explained that the meadow was seeded in May 2013 with the help of a Woodland Grant scheme. She explained the thoughts behind the planting and plans for the future and expressed a desire to hear any thoughts from Doncaster Naturalists about what they had already established. The area referred to as Three Hagges Wood consisted of the meadow bordered by scrub and beyond the scrub, trees planted to establish a high canopy. At the far end of the meadow area was a pond which was only just getting established. We had lunch and then walked back to the car park with the intention of taking a look at the second of the two ponds on the site. 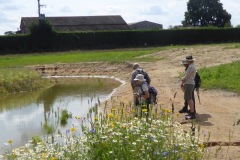 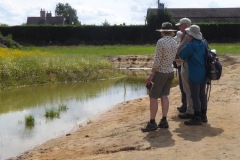 It was fringed on one side with a colourful wild flower mix. Here we saw several dragonflies, including an Emperor laying its eggs in the
water. (see final photo)
Nora Boyle. 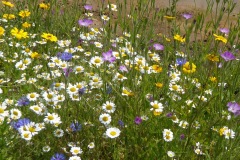 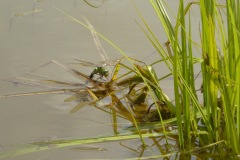 This was an impromptu meeting arranged after the program was publicised. Seven botanists turned up to this Magnesium limestone grassland site hoping to find Autumn Lady’s Tresses Spiranthes spiralis in response to a request by Ivan, a YNU member. This plant differs from all other white -flowered orchids except Creeping and Irish Lady’s Tresses in its flowers being arranged spirally up the stem. Louise remembered that on a previous occasion we had found specimens on one of the mounds and after a short search we found eight specimens. The plants were quite small and difficult to photograph with a compact camera but Les Coe had brought his SLR with a macro lens and took some very nice images as you can see below left. Amongst other species typical of magnesium limestone grassland we found Clustered Bellflower Campanula glomerata, Hoary Plantain Plantago media, the white, tinyflowered Squinancywort Asperula cynanchica and Small scabious Scabiosa columbaria. We also found a lot of Sneezewort Achillea ptarmica, Autumn Gentian Gentianella amerella and Tor grass Brachypodium rupestre. After finding a lot of fairly short specimens of Tor grass I came across what I thought was a more typical specimen taller with a more elongated stem between the spikelets and handed it to Louise for confirmation that it was indeed Tor grass. Whilst looking for the short awns with her handlens, Louise discovered that much of the flower was covered in eggs as you can see in Les Coe’s fantastic photograph below right. As usual, I was on the lookout for galls and was pleased to find specimens of Germander Speedwell galled by the midge Jaapiella veronica. The midge attacks the shoot tips causing the two terminal pairs of leaves to cling together and form a hairy pouch. Each pouch contains numerous orange larvae. After a couple of hours the weather started to change and, feeling that rain was imminent, we drew the meeting to a close.
Nora Boyle. 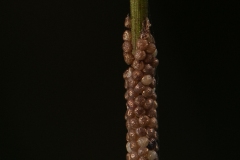 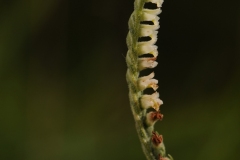 I trust you found something of interest when reading the Newsletter and will consider joining us at Parklands.
Best Wishes
Nora