This newsletter, which covers the Summer activities, accompanies the 2017- 2018 Winter program. Generally speaking the following reports refer to events in bold on your Summer programme. Unfortunately I have missed all the outdoor meetings since the beginning of June so several reports have been compiled by other members and where no reports are available there is only a brief reference to the event. All reports of Moth nights have been supplied by Paul Simmons.

Our first meeting on March 18th was a visit to Hatfield Moor looking for adders.

This was followed by a visit to North Cave Wetlands YWT Reserve looking for early Spring birds. Geoff Carrick sent me this report. “On April 1st nine members attended the meeting to the YWT Reserve at North Cave, a wetland site which has recently been extended. In all, 50 species of bird were recorded including wintering duck and breeding avocets. Several communities of black- headed gulls could be seen as well as a solitary Mediterranean gull. Cowslips and ground ivy were in bloom and great hairy willow-herb was seen emerging in the ditches.”

A fortnight later, following the earlier visit in January, we returned to Barrow Hills Sandpit near Harwell where we found several oak trees bearing oak apples (below left). These are galls caused by the sexual generation of the gall wasp Biorhiza pallida. I understand from Tom Higginbottom that this is a particularly good year for oak apples. Another gall, Puccinia adoxae, which is a fungal gall, was found on Town Hall Clock (see photo below right). 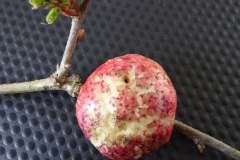 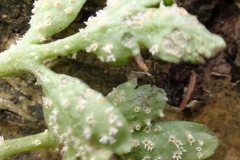 Bluebells were just starting to appear so the mass of colour wasn’t there but isolated clumps of flowers were showing off their beautiful deep blue colour. (below). 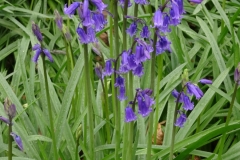 Almost at the end of April, on Wednesday 26th, 5 members surveyed Wadworth Wood. Louise Hill and John Scott recorded botanical species, Tom Higginbottom and myself recorded galls and Bob Marsh recorded insects. In places, the woodland floor was covered with a spectacular show of bluebells and in one area we found a fairly large colony of Early- purple orchids Orchis macula. (below) 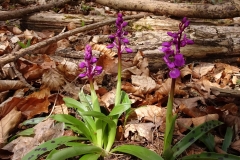 Next an old Ram’s horn gall of the gall wasp Andricus aries with the neat round exit hole clearly showing. This gall is a fairly recent introduction to Britain and only the asexual generation, represented here, is known at present.

On Sunday 14th of May several members met in the car park in King’s wood near Bawtry from which we took a walk through the wood parallel with the road finding such species as Speckled Wood, Wood Melick, Wood Millet, Early Forget me not and Hairy Rush. The bluebells were almost over in the part of the wood near the car park but after leaving the wood walking a short distance along Bawtry Rd back towards town and then re entering King’s Wood we came across a large carpet of blue where the flowers were still in good condition. Turning back towards Bawtry we headed towards Gally Hill in search of Wild Pansies which we did find near the paths where the vegetation was low. Dave Williamson found several interesting insects including a fresh specimen of a male Brown Argus Aricia agestis. (Identified as male because the orange lunules on the forewing don’t reach the apex). See photo below right. 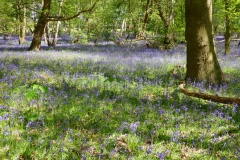 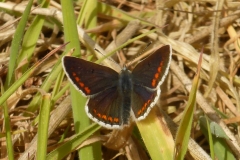 An impromptu meeting took place at John Scott’s farm on Thursday 25th of May to see the meadow flowers and the plants around two ponds. Eight members attended. When we arrived at the first pond the light shining on the marsh orchids and ragged robin was fantastic. (see photo below). 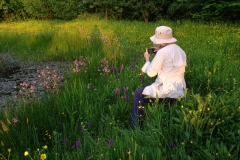 There were many other interesting plants to see including Water Violet, White Sedge and Common Cotton Sedge.

On June 15th an evening visit to Owston Meadows was attended by 15 people, the largest attendance for the year. This report by Pip Seccombe. “The proposed mothing session didn’t take place but Paul Simmons and Dave Williamson were able to identify some day flying moths. Many harlequin ladybirds and one 14 spot were seen. Other insects included Oak Bush Cricket, several plant bugs, a leafhopper and a tiny but spectacular larva of a Tortoise Beetle. It’s been many years since orchids were recorded on the site so it was a great surprise to find Southern Marsh Orchid in some numbers in two of the three fields and Common Spotted in all three.Some members adjourned to Margaret Prior’s house for a cup of tea.”

Paul Simmons wrote at the beginning of his report on mothing nights. “An intrepid band of Nats members brave lack of sleep, hornets and biting midges to attract those reclusive lepidoptera which only venture out under the cover of darkness. Visitors to our various moth traps are slow to come at first, but later there is great excitement as more species join the fun, particularly as old ones turn up!” .

Of the first mothing sessions he wrote: “An impromptu Moth night at Lindholme on the 14th of June produced over 60 species, including at least 3 new ones for the site (Red -necked Footman, Figure of Eighty (far left) and Wood Carpet) as well as other nice moths like Blotched Emerald (middle), Green Silver Lines and Peach Blossom (far right).

On the following Saturday, June 17, on a very warm day eight members attended the visit to Owston Woods. This report by Louise Hill. “ The search for the Argent and Sable moth was fruitless but we did have a lot of Bloodveins. We also saw a tawny owlet sitting on a branch within a few feet of our path and a good sized colony of the Grey Sedge Carex divas which is very rare and later some Broad -leaved Helleborines”.

Of the following 2 scheduled events I have no information and the Marr Flatts visit on June 28th was cancelled.

Going into July, on the Green Lanes visit to the New Junction canal at Sykehouse, which was only attended by John Scott and Jim Burnett, orange balsam was found.

“Another impromptu Moth night at Thorpe Marsh on the 10th of July was very productive with 90 species recorded from nets and traps (not forgetting the Purple Hairstreak butterflies we saw flitting over the oak trees). We had 6 traps set along the main ride and they produced a good selection of moths. 40 of the finds were micros with a Yarrow Plume being perhaps the most interesting. The best of the larger ones were Poplar and Elephant Hawk moths (see right), a Tissue moth (see left) and a Blackneck. The Blackneck has spread into our area in a big way in the last 5 years or so. However the Tissue is very rare and local and this is one of the few sightings in the whole of Yorkshire this century.

On the 20th of July another moth night was arranged at John Scott’s farm where there is an interesting mix of pasture land, wildflower meadows, ponds, ditches, woodland and arable land. On a rather cool and clear evening (moths like it warm and cloudy) it produced nearly 50 species. The ponds were responsible for our finds of Small and Brown China- marks as their caterpillars feed on pondweed. Dave Williamson caught 3 different Thorn moths- Early, Purple and September Thorns. The latter is confusingly named as it is generally on the wing at least by August, and before the species named August Thorn!

Lindholme Fete on 22nd of July was of note since it’s the first fete where groups have been guided onto the moors by Doncaster Naturalists. As usual the Society had a nature table.

The last mothing session was held again at Lindholme. “The weather was not auspicious, it was cool and what clouds there were threatened showers. However, it was fairly calm so we set out several traps on Bank Lane and on to the moor at the northern end and we were rewarded by finding 96 species before rain drove us home around midnight. While we were getting ready a nearby Tawny Owl was calling so we set off in search of it. Dave found it in an oak tree sitting tight and unbothered by our efforts to get a photograph.

When it got darker, Birch Mocha and Maiden’s Blush, which are birch feeders, turned up in good numbers with other regulars like Copper Underwing and Svennson’s Copper Underwing, Haworth’s Minor, True Lover’s Knot and Large Ear. These are all worth seeing as they are not easy to find elsewhere. It was good to get another Black Arches after finding it last year, it is another moth which seems to be spreading north. We had 4 species of Prominents – Pale, Lesser Swallow,Coxcomb and Iron, but the smartest moth of the night was Purple Bar attracted by Louise’s light, it is not a common moth in the area and it seems to be declining. 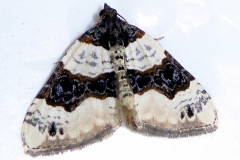 The wonderful thing about mothing is that it’s like opening Christmas presents, you never know what will turn up. No two seasons are the same, and very common species may hardly be around the next year. However new ones keep turning up, which makes it all worthwhile.”

The last meeting on the program in July was to Bunting’s Wood and the Stainforth and Keadby canal. The focus was mainly on plants and two of the flowers found were Arrowhead and Flowering Rush.

In August the first meeting was to Wadworth Wood on the 12th and the last to Bentley Colliery Community Woodland, both sites which we have visited previously. I don’t have a report for Wadworth Wood but I understand from Louise that there was a good turn out for the Bentley visit which included a potentially new member. She also mentioned that there was an interesting number of butterfly species for this time of the year.

I trust I will see some of you at the indoor meetings starting in October.

In the meantime enjoy your time in Nature wherever you go.
Best Wishes,
Nora.
PS. I had a surprise the other day when I came to water my Money plant.