We have had three very successful Fungus Forays recently so I thought I’d make Fungi the main focus of this Newsletter. The intention now is to use photos taken by other members as well as myself so I’ve included photos taken by Tricia Haigh at Lindholme and by Joyce Simmons at both Lindholme and the Almshouses at Hemsworth. I’ve also included two taken by Tom Higginbottom earlier in the year at Dyscarr Wood and two submitted by Les Coe, taken in a local wood. I’m aware that the latin names of some fungi have changed recently so apologies beforehand if I use one which has been superseded. In all three Forays we found lots of Waxcaps, fungi which are found in unimproved grasslands that have been grazed or cut regularly. The most common waxcap we found is Blackening Waxcap Hygrocybe conica. It is also one of the most common found in Britain and Ireland. Seen here at Lindholme on the left, with orange to red caps already starting to turn black and here on the left the maturing fruiting bodies are almost completely black. 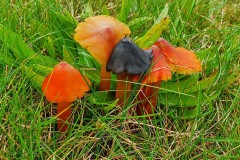 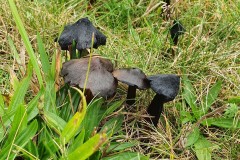 One of the most attractive waxcaps we found is Ballerina Waxcap Hygrocybe calyptriformis, so called because the margin splits with age giving the appearance of a tutu. The photograph on the left was taken by Joyce Simmons and the one on the right by myself; both at the Almshouses in Hemsworth. 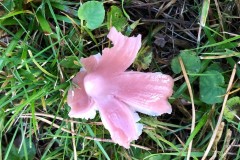 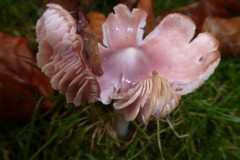 As I mentioned earlier, after DNA analysis, some species of fungi have undergone classification changes. Shaggy Inkcap or Lawyers wig which most of you know, remain in the genus Coprinus but some other ink caps have been reassigned. For example, on the left, taken in Dyscarr Wood by Tom Higginbottom, we have Glistening Inkcap which is now Coprinellus micaceous and on the right, taken in a local wood by Les Coe we have Magpie Inkcap which is now Coprinopsis picacea. 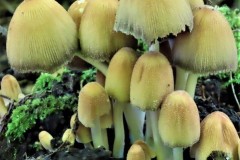 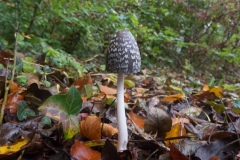 This unusual bright orangey red club called the Scarlet Caterpillar club Cordyceps militaris was taken by Joyce Simmons at the Almshouses. Its spores are released from flask shaped structures on its surface and only survive if they land on a moth or butterfly caterpillar. When the caterpillar enters the soil to pupate the fungal mycelium begins to grow, replacing the caterpillar’s insides. In other words it is a fungus which is parasitic on the larvae of certain species of Lepidoptera. If you find one and dig down you will find the dead caterpillar or pupa attached its base. 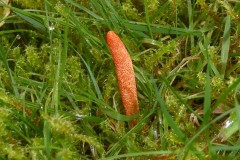 Another unusual fungus, also found at the Almshouses, is Ear Pick fungus Auriscalpium vulgare which grows exclusively on fully or partially buried pine cones. The caps are initially pale brown but darken with age making it quite difficult to locate. As you can see from the photo on the left taken by Joyce Simmons, the underside of the cap is covered in spines and the stem is eccentric, being attached the edge of the cap. My photograph on the right shows the size relative to the pine cone. 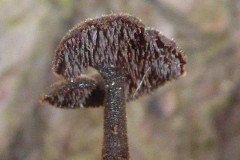 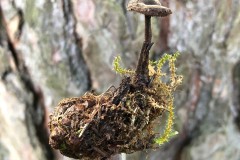 Now two photos of cup fungi. The one on the left is Green Elf Cup Chlorociboria aeruginascans, taken by Les Coe in a local wood and the one on the right is Orange Peel Fungus Aleuria aurantia taken by Tricia Haigh at Lindholme. 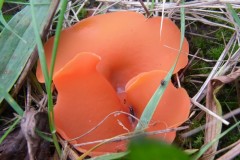 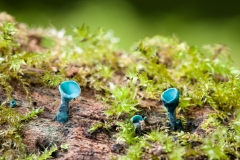 Finally, on the left is Candlesnuff Xylaria hypoxylon growing on deadwood at Lindholme taken by Tricia Haigh and on the right is Dryad’s Saddle Polyporus squamous, taken by Tom Higginbottom in Dyscarr Wood during the British Plant Gall meeting in June. 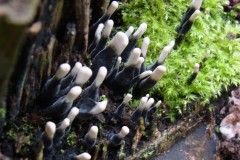 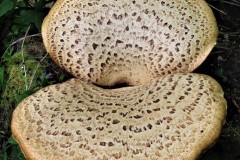