Members can submit their photos for other members to offer their opinions as to the identification of the subject submitted. Send your photo to lescoe “at” talk21.com together with details of when and where the photo was taken, and any other information that would help with the ID, and members can then send their suggestions also to the above email address.

Found this fly resting on car window, near Misson.
Any suggestions of an ID will be appreciated.
Tony 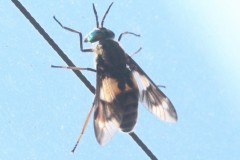 From Ian McDonald
I wonder if Tony’s fly is a species of Chrysops,
Ian.

Tricia Haigh – Unknown object in Shed
My friend Karen has just sent me this photo of what appears to be an egg she’s found in a dark corner of their shed. Do you know what it is? 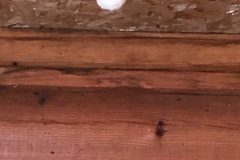 From Ian McDonald.
Could Tricia’s “egg” be the nest of a solitary wasp. I had one in the greenhouse and I’ve seen one under an overhang on a cliff in Perthshire.

Taken on Nats outing to Old Moor, The eyes are reddish brown and I know that Red-eyed Damsel has been recorded there but the markings don’t seem to fit. Any suggestions?

Having a bit of a problem pinning this down – presume fam. reduviidae- assassin – in garden today flying then running about – any help much appreciated!! 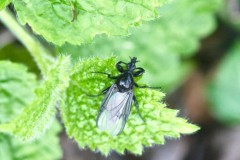 From Nora Boyle
Tony French’s photo of a fly which I believe is St Mark’s fly Bibio marci.

The first was taken at Owston Meadows. The second at Rodley Nature Reserve in West Yorkshire. 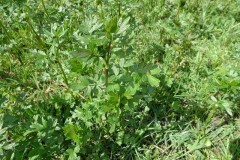 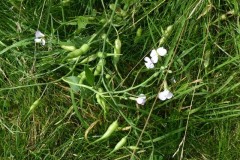 From Ian McDonald
The first looks like Meadow Rue whilst the second looks like Wild Radish.
Best wishes,
Ian 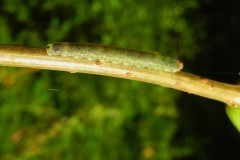 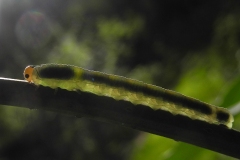 This plant is growing happily on a wild bank in my garden. Any suggestions towards an ID would be appreciated 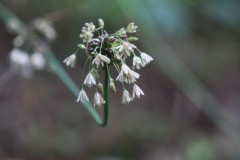 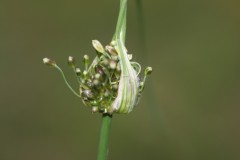 From Ian McDonald
Anthony’s plant is an Allium.
Depending on where he lives and the time of year when it was in flower, it could be A. oleraceum or A. triquetrum.
It also grows along the lane past Castle Hills near Scawthorpe.

Many thanks, Ian.
It went over a couple of weeks back so I guess it’s A. oleraceum?
I see it was recorded by Lees in 1888 in Conisbrough so it could be a descendant! It’s rather local? 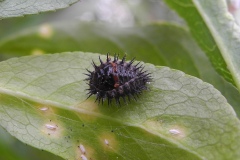 This larval instar is possibly feeding on the small larvae of a scale insect Unaspis euonymi  that share the leaf on which it was found. Any suggestions as to the species.

From Nora Boyle.
This is the larvae of the Kidney-spot Ladybird – Chilocorus renipustulatus 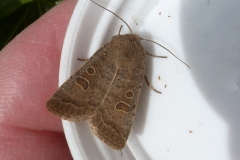 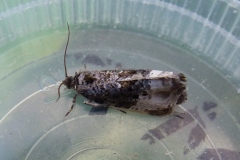 I had a call from Pip this lunchtime about a caterpillar that she found munching its way through an iris clump in the garden. She wondered if it was browntail moth.  I’m not sure.  Louise 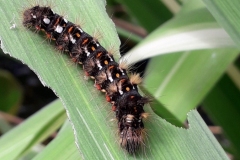 From Paul Simmons
Our suggestion is Knot-grass. It is quite variable but seems to have the right colours in the right places.
Paul 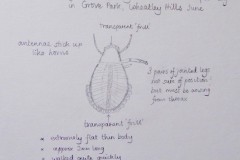 From Anna Thirwell
I wonder if you could help identify the attached please. This was taken in our meadow field at Sykehouse yesterday (9th June). The colour is amazing – a real duck egg blue.
Many thanks.
Anna Thirlwell 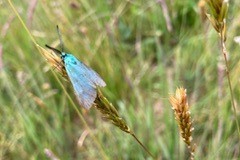 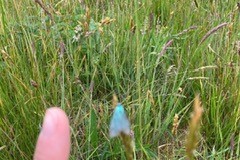 Louise added the following comment
The lovely moth that Anna put on the website is, I believe, a Forester Moth. It is a very good record. Sykehouse and Fishlake are a hotspots for this species because of all the old hay meadows in that area. It’s larvae feed on Common Sorrel
https://ukmoths.org.uk/species/adscita-statices 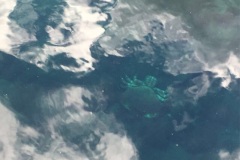 I was sent this photo of a crab seen in the waters at Doncaster lakeside.
It was photographed by a relative of Nats members Jo and Geoff Carreck on or around the 19th May.
We are guessing that it is a Chinese Mitten Crab.
Has anyone had any experience with crabs at Lakeside?

From Les Coe 22 May 2020
Fly on Acer pseudoplatanus (Sycamore) Also, clusters of what may be eggs or gall on the same leaf that may be related or not. This combination occur on several low level leaves on the tree. Any suggestions as to fly ID and if these are in fact eggs of some species or a gall? 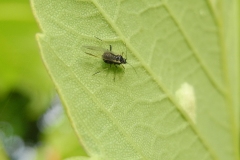 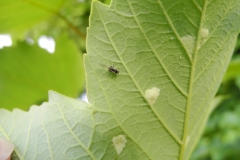 From Paul & Joyce Simmons 12th May 2020
Please, can anyone identify this small tree which is old, spreading and about 4 mt tall. 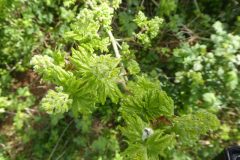 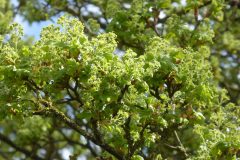 Comment from Louise Hill
Looks maple-ish to me – could it be a Montpellier maple?
http://www.tree-guide.com/montpellier-maple
Unless it is a freakish field maple?

Comment from Ian McDonald
Could the tree be Acer platanoides, Norway Maple? The flowers are erect.

From Anthony French 10 May 2020
I noticed this on a Dog’s Mercury yesterday in our garden in Conisbrough. Several plants have the same.  Can anyone tell me anything about it, please? 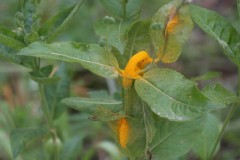 Hi Tony,
This is a fungal gall Melampsora populnea on Mercurialis perennis.
Very common at the moment.
Les

Spider for ID from Ruth Brompton Charlesworth
Spider found on a rose bush in her garden, Town Fields, Doncaster on the 6th May.
Ruth would like to know if this is the green orb-weaver spider Araniella cucurbitina? 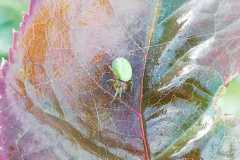 Quoting from Collins Field Guide for Spiders
“Whilst the genus is readily identifiable in the field, identification of the species requires a microscope.”
Les

Larvae for ID from Nora Boyle
I unrolled the biggest leaf to find 3 very small orange caterpillars. The leaves are Lime leaves and they were near the base of the tree with root suckers. The tree is on the path outside the entrance to Grove Park. 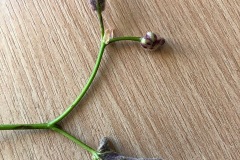 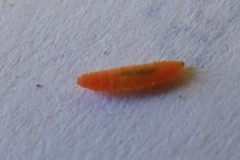 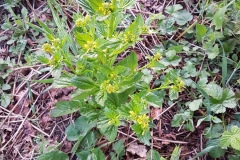 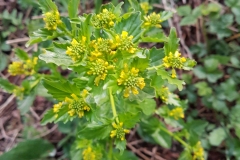 Comment from Louise Hill
Caroline’s photo looks like Barbarea vulgaris to me – Winter Cress Not unlikely in that setting.
Louise

From Nora Boyle
Here are two photos both taken in Grove Park. The first is an unknown plant with ladybirds, taken on 28th March and an unknown insect (which I think is a hoverfly) taken on 25th April. Suggestions welcomed. Nora 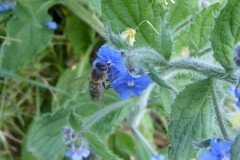 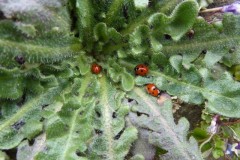 Comment from Louise Hill
Nora’s first photos look like alkanet.  Stace only give one species – but I’m sure there are some cultivated versions that are much more floriferous than others.
The other photo of the ladybirds seems to be a rosette of Common cat’s ear Hypochaeris radicata but it is perhaps a bit early to confirm.
Louise

Unknown Moth from Nora Boyle
Caught in my trap on Monday 27th April 2020.
Any Suggestions towards an ID please.
Nora 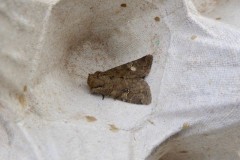