Until recently I referred to the wood which I have visited on two occasions since lockdown as Shaw Wood. I now know it as Hagg Wood and Shaw wood itself lies beyond Hagg Wood.

I have visited Hagg Wood regularly in the past, primarily to photograph the magnificent displays of bluebells which are at their best from mid April onward. Here are some photographs taken on the 17th of April. I expected to find wood anemones  as in previous years but I didn’t find any. 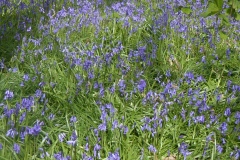 On my way out of the wood by the side of the Industrial estate I came across two insects on sycamore leaves very close to each other and I was lucky enough to get fairly close photographs of both. The first was a greenbottle in the genus Lucilia.. They are very common and known to lay their eggs in cadaver tissue in the wild within hours of death. The developmental stage of their larvae can be used to determine the exact time of death. 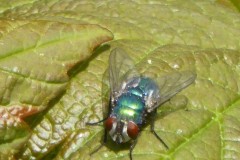 The second was obviously a hoverfly  and it was fairly easy to attribute it to the genus Eristalis but I wasn’t sure of the species so sent a photograph to Derek Whitely of the Sorby Natural History Society who confirmed that because the first and middle leg tarsi were yellow it was Eristalis pertinax. I took several photographs and these two were the best. I knew it was a female because the eyes were separated but it wasn’t until I looked closely at the second photograph  that I noticed  it had extended its ovipositor. I wonder if I had stayed longer it would have commenced egg laying? 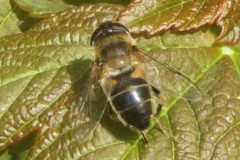 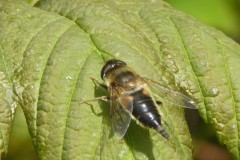 My second visit was on the 26th of April, 9 days later. By this time the bluebells were fully open providing even greater swathes of colour. The slightly overcast day was perfect for photographing blue flowers and capturing the depth of colour. 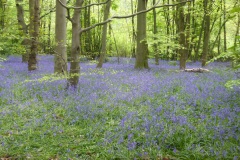 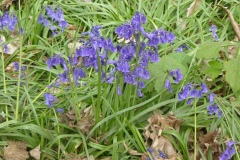 Whilst examining oak leaves for galls I came across a black fly which I later learned was a male St Mark’s fly Bibio marci so named because adults usually emerge round St Mark’s day on the 25th of April. In the second photograph you can see the male and female mating. The larger female has a smaller head. According to one of my books there is only 2mm difference between the two but in this picture the female looks much bigger than the male. These flies are widespread and can regularly be seen on the edges of woodland hanging in the air, drifting along with their legs dangling below. I have seen them several times before but hadn’t realise what they were. 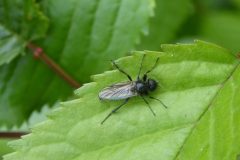 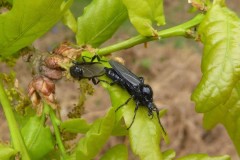 I also found the very distinctive caterpillar of the Yellow -tail moth Euproctis similis. These caterpillars grow up to 43mm and feed on a variety of deciduous trees including oak. Their bodies are black with long irritating hairs, an intermittent red line along the back, a row of white blotches down the sides and a line of red marks in the spiracular region (shown in the second photograph). 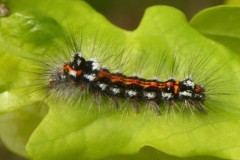 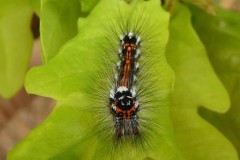 Eventually I did find some galls. As you would expect at this time of year there were some oak apples caused by the cynipid wasp Biorhiza pallida (only a few high up in one tree) Typical of cynipid wasps is the alternating life cycle which produces a sexual and an agamic (asexual) generation. This gall contains the sexual generation but is caused by a wingless asexual female has laid her eggs in a dormant leaf bud after emerging from a root gall (the asexual generation) in December or January. The eggs would have laid dormant until spring when they hatched and the feeding of the larvae initiated the development of the gall. These galls are multiocular, meaning many chambered, and if you cut open an oak apple you can see each larva has its own chamber. The second photographed shows a gall cut in half.

When it matures in May or early June the sexual generation of wasps emerge. Males usually emerge a few days earlier than the females and mate as soon as they appear. The mated females fly to the ground seeking a suitable spot to lay their eggs in a root eventually causing the asexual generation of root galls. 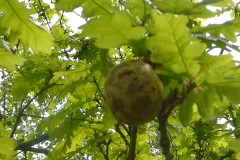 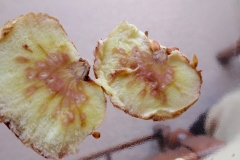 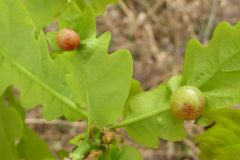 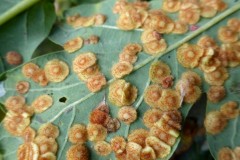 The third and final gall which I found on this occasion was a mite gall called Aceria campestricola on an English Elm tree. These galls which often appear in large numbers, sometimes covering the entire leaf blade, are pouch galls which have an opening in the conical projection on the underside of the leaf. They start out green but turn to red or yellow pimple like galls. 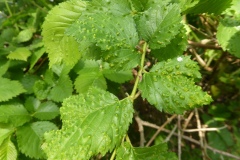