The meeting started at the Trans-pennine Trail car park as indicated on the R.S.P.B. map. Almost straight away we heard the familiar song of Chiffchaff, a song we continued to hear as we moved through the reserve and in several situations we were lucky enough to have extremely clear views of birds perching high in the tree tops. 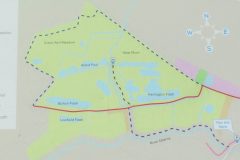 We followed the Trans-pennine Trail until it met the public bridleway, shown on the map in red, heading towards Harlington Flash. Ash buds were just beginning to open revealing the blackberry-like fat buds of the flowers which appear before the leaves. Blackthorn flowers on some bushes were beginning to show signs of decay, petals falling to the ground giving the appearance of plants with tiny white petals but others still appeared as masses of fresh white flowers, as with the ash, appearing before the leaves. Walking along the bridleway we came across a fellow birdwatcher who explained he had been observing a Little Owl flitting in and out of the canopy of a tree in the distance. In order to get a bit closer for the chance of seeing the owl we left the path and walked round the edge of a circular pond shown to the north of the reserve on the R.S.P.B. map. Unfortunately, it wasn’t possible to get much closer but Tim was more interested in the pond and noted that there were several clumps of frogspawn along with water mint with its very distinctive minty smell. 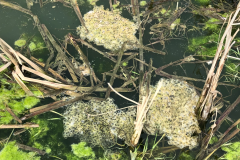 In the hedgerow were several pussy willows bearing catkins at various stages of development. Willows are dioecious meaning male and female flowers grow on separate trees, the term pussy willows used to refer to both male trees and the furry catkins which appear early in the year and well before the leaves. Some of the willow catkins observed were still tightly closed and covered in covered with tiny silver hairs acting as insulation to protect them from cold temperatures but some, as in figure 3, were fully in bloom and stood out clearly in the blue sky with their masses of yellow pollen. 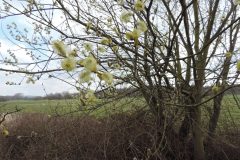 On leaving the pond we continued along the public bridleway until we reached Harlington Flash. There we could see Canada geese and Greylag geese feeding both in the water and on the surrounding grassland. 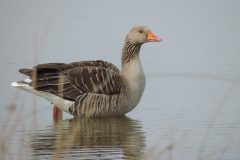 Waders such as Lapwing, Redshank and even Little Ringed Plovers were also observed. We spent a fair amount of time watching two species Ruff and Black-tailed Godwit which weren’t on the list for the 12th of March. Avocets with their magnificent black and white plumage and grey-blue legs were feeding in the shallower water near the islands. 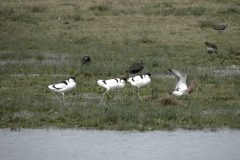 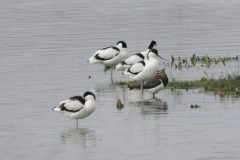 After some time, we headed towards the viewing point shown on the R.S.P.B. map and on the way, we observed two Pink- footed geese with their darker heads and as the name suggests, pink legs.

In the trees and shrubs alongside the paths we saw a good number of passerines whose names will appear on Colin’s species list accompanying this report.

From the viewing point we picked up several species which we hadn’t seen on the Flash in particular Little Egret, Shoveller, Wigeon and Common Gull.

At about 3.30pm we returned to the public bridleway, crossed over to the other side and headed back to the car park via the bank of the River Dearne. We left the car park at approximately 4pm. 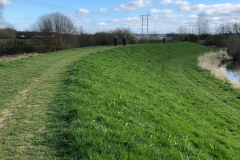 On arriving back along the flood embankment Tim Kohler drew attention to the large accumulation of tree and shrub debris deposited on the central buttress of the carboniferous sandstone Adwick road bridge. The height of the debris indicated that the floodwater from the February storms [Dudley, Eunice and Franklin] had almost reached the level of the carriageway.

A bright sunny day, the Butterflies were becoming active with sightings of Brimstones punctuated by Commas (!) 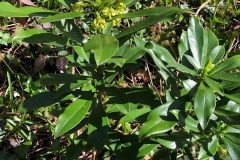 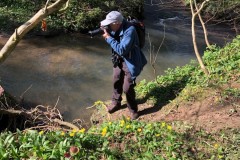 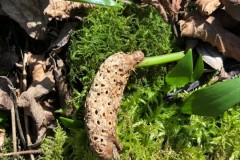 Aims: To work out routes and timing for the Nats visit scheduled for Sunday 27 March 2022 looking for birds and other wildlife on the water meadows and marshes.

Hedge along bridleway
Since this roadway features on the 1st edition 1 inch to 1 mile Ordnance Survey map, surveyed between 1838 and 1840, the shrubs and trees by the path are probably the survivals of an old pre-enclosure hedgerow. Species noted include Gorse (f); Ash; Honeysuckle sp.; Rose (sp); Blackthorn; Holly; Hazel (coppiced); Sallow sp.
Long-tailed Tit 3 +

Walked from Outlook back to Transpennine Trail car park via the river Dearne flood embankment 3pm to 3.20pm (20 minutes).