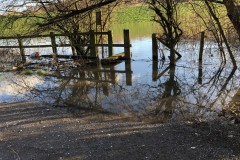 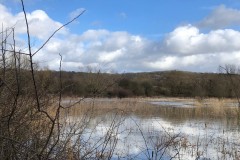 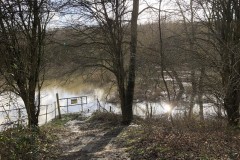 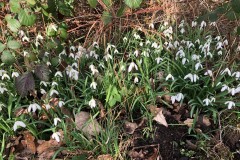 A select trio turned out for the walk round the NNT Idle Valley Reserve. The 9.6 km (6 miles) walk was exhilarating despite wet and windy weather. Time taken was 2 hours 37 minutes. Speed 3.7 kph.

We took the boardwalk to the left of the Visitors’ Centre. The marsh on either side exhibited last year’s bulrushes and the dead stems of purple loosestrife. Flowering rush and wood club rush have been seen here in the past. The birch, alder and aspen woodland beyond greeted us with a singing Wren. Robins and Blackbirds were evident. Reaching the viewpoint over the lake, we stopped to observe waterfowl: Canada Geese; Grey Lag Geese (both in the water and in the air (noisily); Coot; Mallard; large numbers of LBB Gulls; Black-headed Gulls; many lapwings; a few Shoveler; a Mute Swan; 3 drake Goosanders resting and a female Goldeneye diving.

Taking the path to the left we noted Hazel bushes with a fine display of catkins and apples strewn on the ground. Possibly they were genuine Crab Apples – the distinction with self–sown Domestic Apples is not easy. Further on, we found some fine specimens of Scarlet Elf-cup, and a brace of ferns (Golden-scaled Male Ferns and Broad Buckler Ferns). A small parliament of Rooks flew over. Plenty of alders grow in this moist woodland and siskins are usually present, though not on this occasion. Reaching the river bank we surveyed the fields across the Idle for Egyptian Geese. They had gone, but there were large numbers of Grey Lag Geese consuming grass seedlings. A Sycamore was noted by the bank, while to the left is a colony of pines, which hold Goldcrests. These were audible, but not visible. Moorhens and Blue Tits were seen by the river.

A variety of budding willows were seen along the bank – Grey Willow; Goat/Pussy Willow and Osiers.There are also some fine specimens of Crack Willows. Cow Parsley was emerging by the side of the track. An early flowering Prunus  near the fork was photographed to determine the species. Wending to the left away from the river , we passed between two gravel pits holding numbers of Coot and Gadwall. A Great Tit was heard. More Hazel and several briars (with Robin’s Pincushions) and Broom bushes were noted. Sheep in the fields between us and Tiln Wood  were enjoying mangold wurzels.

The return path from the Idle was passed to the right and we advanced up to Chainbridge Lane. We saw more Grey Willow and Watercress in the ditch. The hedgerow held oak and hawthorn. Several Cormorants flew over.

We turned right just before Chainbridge Lane and crossed the reserve to rejoin the river. A flock of Long-tailed Tits escorted us. A Redwing was heard, but not seen. Tufted Ducks were active on the water to our right. We planned to have lunch in the hide in the old part of the reserve across the lane, but this area is now heavily defended against the public – presumably it is reserved for the  Beavers.

We then marched at pace back to the car park as heavy rain was falling. On the way we met two striped toadstools, but they proved to be Louise and Tim under vast umbrellas. They were proceeding widdershins. We kept to the river path till it joined the main drag. A fine clump of Snowdrops was seen on the bank close to the water’s edge. More elf-cups were passed. We re-examined the lake and saw a group of Teal.

Note ;- One member, who departed early from the above walk, spotted a Great White Heron on his way back to the car park.

Supplementary reports are also provided by CAH & Louise, who both made independent surveys.

‘February fill dike be it black or be it white’. Ancient weather proverb.

After the ‘sturm und drang’ of Storm Eunice on Thursday/Friday, Saturday was a pleasant sunny morning which by 11am, when I got to the Idle wetlands, was deteriorating into a miserably gloomy day with fine then heavy rain turning to perishingly cold (3.5OC), marrow chilling sleet. What made it worse was that the enticing Café and visitor Centre were closed and in darkness.

However, a brisk march (squelch) around the main lake provided views of the following birds:

We arrived late, at 11am, and set off in the rain to follow the riverside path to Chainbridge Lane, scanning the fields east of the river for birdlife.  There was a large number of greylag geese grazing and the hunched figure of a single grey heron.  A surprising number of anglers were positioned around some bleak-looking fishing ponds not far from the river.   As we neared Chainbridge Lane we encountered two rather soggy members of the Nats heading in the opposite direction but the strong wind and heavy rain was not conducive to long conversations!

We had intended our lunchtime view to have been looking out across the wetlands south of Chainbridge Lane but the rain was coming sideways in a westerly gale so we ate our sandwiches one handedly while trying to hold our large umbrellas into the wind.  We agreed that one or two hides or the odd bench would improve the visitor experience at the reserve!

The enticement for the long walk to the northern end of the reserve on a cold and wet February day was the opportunity to see some beaver signs but we were most disappointed to find that the beaver compound was off limits behind a paywall.

Our route back was more sheltered but followed a very muddy track alongside a field containing a herd of bedraggled longhorn cattle and rare breed sheep before looping back to rejoin the riverside path.  We chose to vary the return route by following the wooded tracks on the western edge of the reserve where we encountered some scattered patches of snowdrops.  We also encountered a great deal more mud and vast puddles, some of which were so big they had their own resident pair of mallard which flew off when we splashed past.

Passing the edge of the main lake on our return to the car park we spotted a couple of diving birds in the far distance. A quick squint through rain speckled binoculars revealed that they were probably goosander.

An ideal end to the walk would have been to warm up with a hot drink but the visitor centre was closed so we headed back home for a cup of the tea and a well-earned cherry Bakewell. 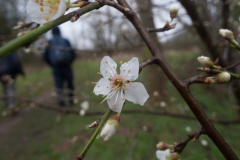 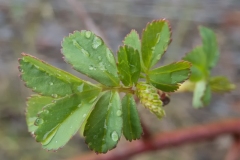 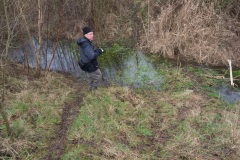 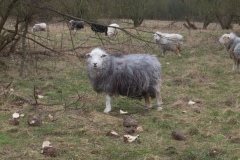 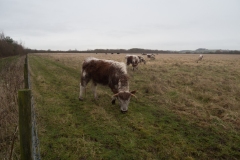 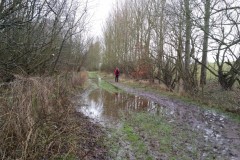 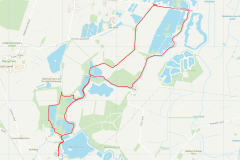 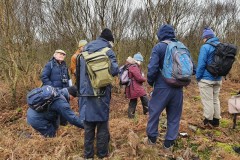