Melton Wood survives as a colourful island of buzzing, babbling, interacting nature,
adrift in an ocean of arable crops made necessary by our clamouring hoards.

After discussing the failures and … well … more failures of observing the convergence of Jupiter and Venus near the eastern horizon at 5am that morning, we were cautioned about the prevalence of dog dirt in the vicinity of the car park, the tripping hazards of tree stumps, fallen branches and bramble briars on the networks of woodland paths, and were advised to examine, sketch or photograph the notice board showing the map of the woodland rides so as to navigate our way back to the cars.  The hearty group was then introduced to our guest (who had walked to the venue from Sprotborough) David Carroll, author of the book on the natural history of Melton Wood, which he reminded us, had been published by the DDOS exactly 40 years ago! (see references).

The group proceeded via the winding paths along the wood’s eastern perimeter, visiting the small, now overgrown, limestone quarry (not on the OS map) and proceeded to the northern portal of the main north/south ‘green lane’. Here we stopped for lunch and looked out over the arable monoculture due north towards the village of Marr, to the northeast to the wooded artificial uplands of the newly landscaped Brodsworth colliery tip (now re-branded Brodsworth Community Woodland) and due east to the chaos of traffic on the A1(M). Then looking to the west we could see at close quarters the array of wind turbines and distant views of the hedges and treescapes in the vicinity of Hickleton Park. Looking north towards Brodsworth Park, the now extensive arable landscape between Marr and Hickleton, appears on the 1st edition OS map as a huge area of deciduous woodland known as ‘Marr Thick’ … sadly now all gone.

After lunch we proceeded south along the length of the ‘green lane’, encountering the fascinatingly incongruous (on the limestone) peaty marsh and Rhododendron area. Some of us ventured west to list species in the 1km square SE5003, then on to the southern portal of ‘green lane’ with its gloomy grove of about 50 venerable Yews, the origins of countless sapling yews throughout the wood. The portal looked south out over yet more arable and to the tower of Melton Church and the roofs and tree tops of High Melton village.

The day had been a joy of carpets of colour, of yellow (of Lesser Celandine), white and pink (of Wood Anenome) and blue (of Bluebells), and a lofty architecture of mature tree trunks of Ash, Beech and Sycamore, Poplar, Pine and Yew.

The group met at the Crags Road entrance, split into two groups, one walking east to the Lady’s Valley quarry then west to the allotments, the other walking west along the crags then back to the allotments where both groups met for a very generous and enjoyable picnic lunch provided by the friends.

Although the Crags extend into at least three Ordnance Survey 1km squares, during this preliminary visit we mainly recorded in the 1km square SK5099. However, in future we need to name specific target sections of the Crags complex and record them separately.

“… it is indeed a very attractive place to visit. In early spring the Wood Anenomies, Bluebells, Violets, Primroses and Cowslips are a pleasure to see whilst later, as the trees burst into leaf, Ramsons form a white covering on the ground interspersed with Yellow Archangel and Red Campion” (Dorothy Bramley 1993).

Aims: The aims of the excursion were to record in most of the 1km squares covered by the mosaic of woodland habitats of Wadworth Wood, enjoy the flush of spring flowers, estimate the number of Spurge Laurel clumps, attempt to locate the population of Lily of the Valley and record the dominant ground flora colonising the curious Sink Holes. The wood is recognised as a DMBC Local Wildlife Site, was surveyed by the Doncaster Nats in 1992 & 93, and was the subject of a Nats publication edited by Dorothy Bramley (Bramley, 1993).

A Catalogue of Errors

Two days before the advertised event I prospected the assembly point, the track to the venue and walked around the networks of paths and routes through the larger part of the wood as far as the M18 underpass and back. All seemed well for both natural history and health and safety.

Being in denial of the advertised 10am start time, I drifted through the morning expecting to emerge at 10.30. This was despite frantic, but unheard, phone calls and tappings on doors and windows by our reliable and dutiful president … so I apologise for my late arrival at the Short Lane venue.

All went well during the morning until we passed through the underpass to reach the sections of woodland to the north of the M18. Here, despite the absence of significant rain, the rides were like the Somme, churned and deeply rutted by trail and quad bikes. This required us to enter the woodland, attempting to make progress parallel to the paths. However, this brought us into direct and exhausting conflict with brambles, dangerously abundant dead wood and the debris of tree felling, all making scratching, stabbing, tripping and falling a likely outcome.

Being unable to use the defined paths also presented us with the problems of how to traverse the normally dry gullies running down to the series of ‘sink holes’ which we’d come to inspect and which to the south of the M18 had presented no problems. This day the gullies, which had been used as water hazards by the ‘off roaders’, were impassable leading to lengthy and strenuous detours, again though thick undergrowth with perils underfoot.

Although nobody actually died and after several confirmatory phone calls we had all got home, Nora and Louise had indeed suffered falls. Painful knees and hips were further inflamed by the strenuous and unremitting exercise and Louise who slipped and fell headlong into one of the flooded ruts had been covered in what potters would describe as ‘clay slip’.

In retrospect, as leader I should have prospected the entire woodland complex and abandoned the visit to the areas to the north of the motorway. 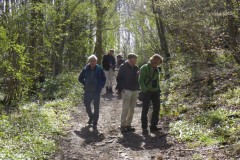 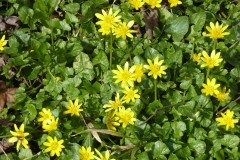 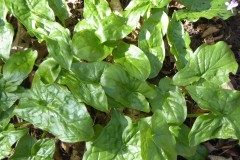 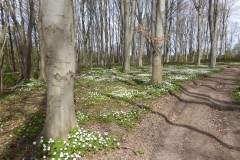 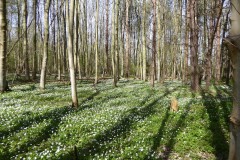 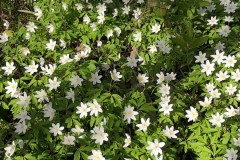 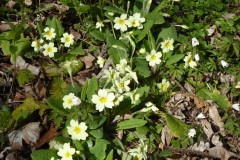 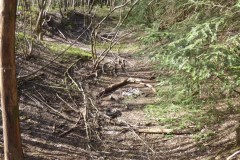