On the 15th of June 2020 I found what looked like some moving frass on a Creeping Thistle leaf. On closer examination I discovered that there was something underneath the frass. I found another specimen and took the two home. I photographed them and sent the image to Bob Marsh who confirmed that they were Thistle Tortoise Beetle larva. I subsequently examined them under a microscope and observed their behaviour and in the fullness of time I was lucky enough to witness the pupation of one of them and part of the emergence of the adult beetle.

Morphology of Tortoise Beetles in General

Adults
Thistle Tortoise beetles belong to the leaf beetle family Chrysomelidae and sub family Cassidini of which there are over 3000 species. They get their name from the fact that they resemble a turtle because of the forward and sideways extensions of the body. The specific name rubiginosa refers to the beetle’s ability to produce a reddish liquid from the head. The elytra are matt green and the beetle often sits with the edges flush to the underside of the leaf where it grazes on the surface. The shell covers the whole of the beetle’s soft body and it is even slightly curved to cover it even more. Its undersurface is therefore protected from ants and because it melts seamlessly with the leaf it’s less likely to cast a shadow for predators to see. The head is hidden beneath a rounded pronotum and is flattened with the  outhparts ventrally orientated. The eyes are large and occupy most of the margin when looked at from below. The antennae are eleven segmented and placed close together between the eyes.

The adults and larvae feed on various Asteraceae including thistles and many others. The adults may also feed on the pollen of buttercups and ox-eye daisies. The consumption of these plants is facilitated by a symbiotic relationship with the bacterial symbiont Stammera which is housed in specialised structures within the foregut and allows the beetle to digest pectin which is indigestible to most animals. In New Zealand it has been used as a biological control agent against the thistle Cirsium arvense where the plant is competing with crops because both adult beetles and their larvae remove the photosynthetic tissue reducing the vigor of the plant.

The larvae are oval shaped with spiny lateral projections called scoli on the thoracic and abdominal segments that poke out from the edge of the body. These are sensory organs that tell the larva when something brushes against it so that it can either hunker down on the leaf surface and cover its body with a shield -like structure which it carries around attached to two prong -like caudal appendages called cerci or it can shove it in the face of an attacker. It is most effective against predators with chewing jaws like ladybirds but not so much against predators with piercing mouthparts. The oval body is domed in the centre and down the middle is a yellow narrow passage in which there is movement of particles as the larvae are feeding so I assume that is the alimentary canal. The structure held in place by the cerci or anal fork is composed of several cast skins and an accumulation of the larva’s own faecal material. Apparently the beetles have 5 active instars. At the end of each of the first 4 instars moulting takes place and the old larval skin, the exuvium, is pushed back and becomes attached to the anal fork. Each succeeding exuvium is distinct and attached to the proceeding one. You can see this in photograph No 1. 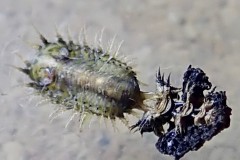 Photograph No 2 shows a larva with the structure held horizontally over its body. I watched it walking slowly across the leaf as it grazed on the upper surface leaving characteristic window -like patches where the surface had been removed. It was interesting to see the larva adjusting the position of the “shield “, sometimes flicking it away from its body into an almost vertical position as shown in Photograph 3. 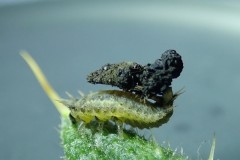 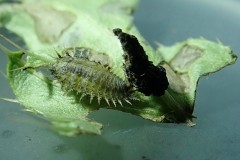 It seemed to be quite athletic in its movements, being able to move from feeding on one surface of the leaf to the other whilst still carrying the camouflage as shown in Photograph 4 below. In Photograph 5  you can see the way the spines stick up over the head area, the head itself with the large eyes and the 3 pairs of  jointed legs with which it walked over the leaf In search of a place to feed. 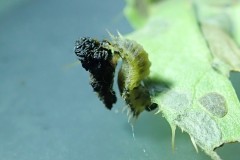 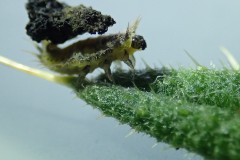 I continued to watch the larva and could see that at intervals a transparent tube kept emerging from the anus and extending up to the edge of the “load” it was carrying. It then deposited a moist dark green deposit of faecal matter which fairly quickly hardened and blackened as it was exposed to the air. This is illustrated in Photograph 6 below. In this way the “shield “ continues to grow and in some cases the beetles can carry faecal loads which weigh as much as half their body weight. The shields never really hide the larva completely but they discourage predators such as ants, bugs and spiders. 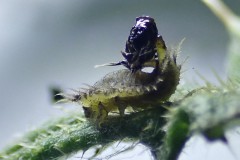 Prior to pupation, the waste is shed and any further matter excreted is deposited on the surface of the leaf instead of on the cerci. Photograph 7 shows a  larvae from above having shed its load.  Photograph 8 shows another larvae, from the side, also having shed its load or “shield”. Here you can see the free cerci, the anal tube though which faecal matter is deposited and some thin strips of loose faecal matter. Eventually the larvae stop eating and go into a motionless diapause period during which the head becomes flattened against the body, as you can just see in Photograph 9 in preparation for pupation. 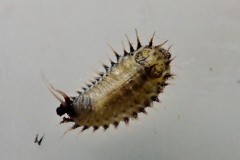 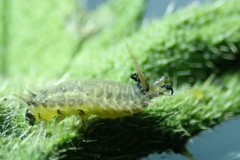 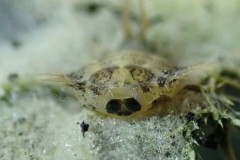 On the 27th of June I was lucky enough to witness one of the the larva pupating. The second pupated when I wasn’t looking. Unfortunately I didn’t have my camera to hand so wasn’t able to video the event. It started with a lot of movement in the lower half of the body, the lower three segments were being sloughed off and pulled right back to the cerci causing the extreme wrinkling seen on a completed pupa. While this was happening the front end was being lifted up so that it was almost vertical and there were tremendous waves of movement inside the body as it squeezed out the pupa from the lower end, segment by segment. About eight minutes after the process started the skin over the head began to split and the front end was transformed into the shield -like structure at the front of the pupa.

The main body of the pupa was pale orange but the spines on the sides of the body and the shield-like part over the head were transparent. Still huge waves of energy could be observed causing the pupa to arch in the middle of its body. Each time the front end lifted up it seemed as if it was trying to pull back the remains of the larval skin and I kept expecting to see more than 5 of the side spines but that number didn’t change. Photographs 10 and 11 show the pupa from the side and above  shortly after the head split. 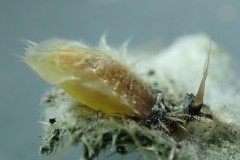 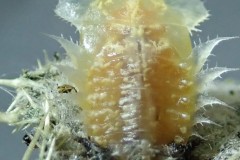 As time passed the pupa started to change colour and darken (Photographs 12, 13 and 14). During the darkening period I bent back the leaf and took these photographs of the underside. (Photographs 15 and 16). 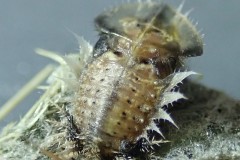 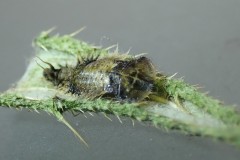 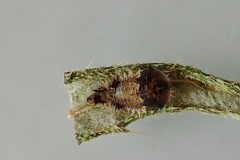 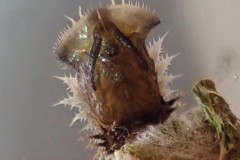 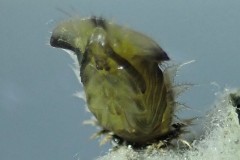 I watched the pupa for a long time during which there was repeated “ twitching” or “forward pushing” in the part of the body below the scutellum, the small triangular plate behind the pronotum, and I kept expecting the pupa to split at this point and the beetle to emerge. The following photograph 17, taken with a camera attached to a microscope shows the scutellum and the shape of the head showing though the shield-like part of the pupa. About two weeks later I just caught the end of the adult beetle emerging from the pupa. Unfortunately one of its wing cases got stuck and it wasn’t able to emerge completely as you can see in the next two photographs 18 and 19 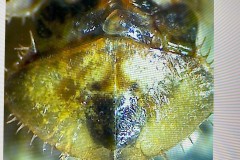 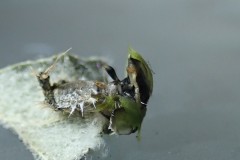 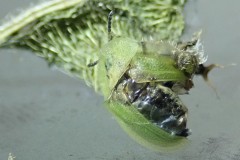 After watching it struggle to get free I used a blunt needle to hold the pupal skin still and prise it off the wing but the wing wouldn’t go back into place and the beetle was left walking with one wing case dragging on its side. At this point I put the beetle in the garden on a thistle.