With the Lockdown period enticing many people to tackle the long- avoided DIY jobs I have been looking at the rather dodgy mortar and pointing around the gable end of my house. I had contemplated patching this up but have decided to leave it be – as many of the gaps are perfect access points for bats to get into the loft. I live in hope that they may take up residence one day. So far they seem to have completely ignored the bat box I put up well over a decade ago.

Another pleasing observation has been seeing a pair of goldfinches taking nesting material into a Garrya bush in the driveway. I think this is the first time I have managed to find a goldfinch nest in the garden.

The robin’s nest under the carport must be full to bursting with chicks, judging by the racket that comes from the box every time the adults approach. I expect to see an ‘eruption’ of fledglings before too long. This will be a nerve-racking time as the young robins seem to have an uncanny knack of getting stuck in any number of locations – such as buckets, watering cans and even gaps between flower pots – often with fatal consequences. Time to cover the patio water feature with the brazier lid again….. 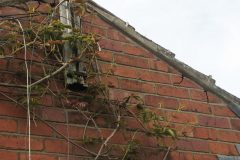 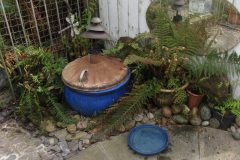 I was very pleased to hear my first local chiffchaff singing in the spring sunshine of Wheatley Hills this morning (March 25th).  Several butterflies were on the wing yesterday – including brimstone and peacock.

I probably had in excess of 100 clumps of frogspawn in my pond at the end of February.  Most have now developed into the little black comma- shaped larvae that have broken out of their individual spawn and are massing together to munch through the remnant jelly in the warm shallows around the edge of the pond.

We have had some unwelcome guests on the pond as well.  A pair of mallard which specialise in vertical take-off and landing techniques to get into and out of the pond itself.  The drake comes down first and then calls down the duck. He then stays on guard while she tries to gobble up the frogspawn.  I’m afraid I have had to evict them on several occasions and put wire mesh over the spawn. We have had a pair of Mallard visit every year since 2011 – always at frogspawn time.  I wonder if it is the same pair? 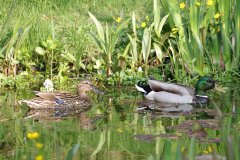 I observed the first bat of the season seen flying around the gardens of Wheatley Hills on the 14th of April 2020. Another was seen last night (21st April).