August 2020
Autumn is approaching, and out come the fungi. 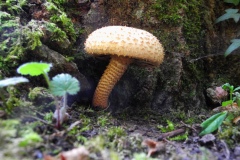 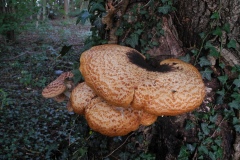 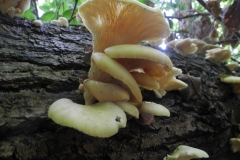 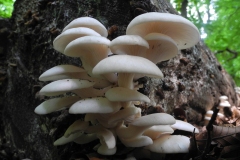 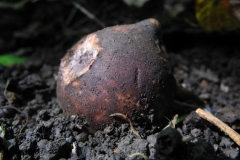 This is the ‘egg’ of the Collard Earthstar – Geastrum triplex. It will develop over the coming weeks to form the typical shape of the earthstar. 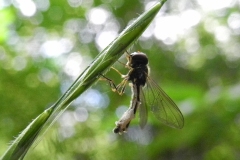 A hoverfly has been infested by the fungus Entomophthora muscae, which induces the fly to seek out the high point of some vegitation, often a blade of grass, there the fly will be killed by the fungus and the fungus then emerges from the flies body to sporulate, thus seeking to infecting more flies in the area.

There are many Small Tortoiseshell – Aglais urticae working the fieldside hedgerow. 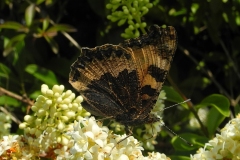 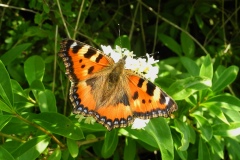 On a warm sunny morning 9th May a mixed bag of flies where out and about along the edge of the wood that was bathed in the warm sunshine. 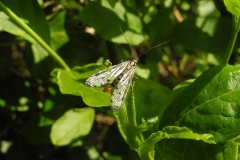 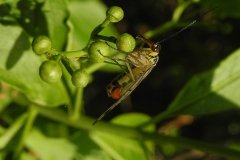 To identify the male scorpion fly to species level one  needs a good photo of the genital organs. 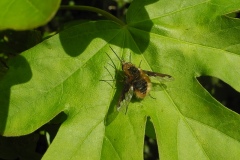 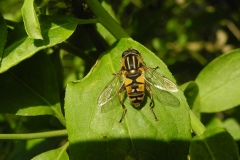 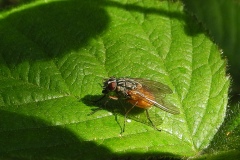 I was surprised to find a Bee-fly still about and this was the first Helophilus Hoverfly seen so far this year.
This Muscidae fly was a new one for me, the first time I have come across this genus.

Walking along the field-side path towards the wood, the bright yellow-green of the Sun Spurge shone out from the dark green of the nettles. I also noticed that they were becoming infected by an orange fungal rust.

Further on, a St Mark’s Fly was spotted resting up awaiting the return of the warmer weather and the rays of the sun before venturing out. 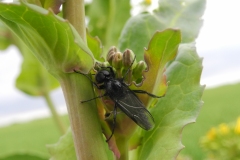 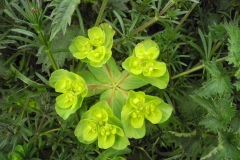 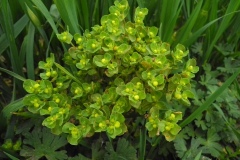 The woodland is has now been carpeted with ransoms; a woodpecker is hammering away and an occasional wren calls from the brambles, but otherwise all is quiet. 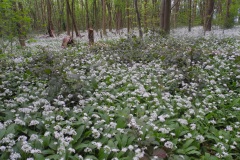 Laughton Wood is a small Ash woodland on limestone, surrounded by agricultural fields, lying between Dinnington, Laughton and Firbeck. Dog walkers and horse riders use the bridle path that cuts through the wood, but usage is light. 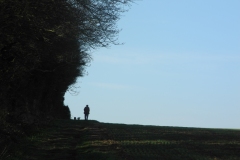 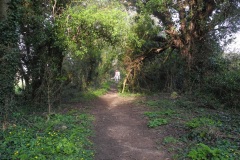 Through March the understory is carpeted with Wood Anemone and has plenty of Common Dog Violet and Lesser Celandine. Along the bridle path can be found Field Speedwell, with towards the end of March Greater Stitchwort, Cow Parsley and Goldilocks Buttercup are beginning to make an appearance. Greater Spotted Woodpeckers are busy hammering on trees at this time, too. 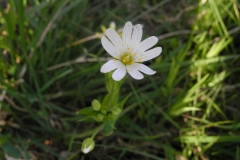 Found on a fallen tree trunk, an old Earth Star 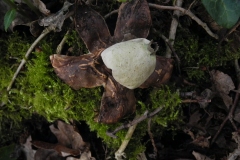 A more unusual find was a well tended grave. 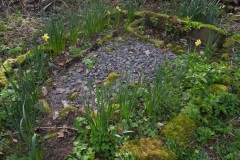