12th July 2020
We saw 4 of these Silver-washed Fritillary today, both males and females – the one in the photo is a male. This could be the result of the couple of butterflies seen last year producing offspring, and therefore the first evidence of breeding for the reserve, though they may have been here in the 1800s. They are Britain’s 3rd largest butterfly.
Paul 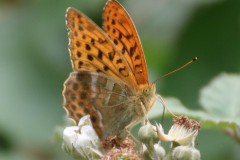 8th May 2020
The very summery weather continues, though Brockadale is very parched still. There has only been a brief shower since the lock-down began

Lily-of-the-valley is out now. this is a plant of limestone woodland. Where it grows now has actually lost its trees (mainly through Dutch Elm Disease, but it is still thriving. 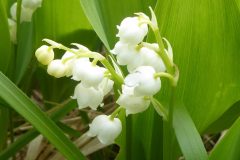 This spectacular fungus is Chicken-of-the-woods which is found on mature trees, at the moment there are good specimens on old Willows and Ash trees. It is edible when young (though some people are allergic to it) and specimens growing on Yew may be poisonous. 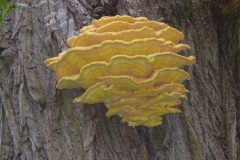 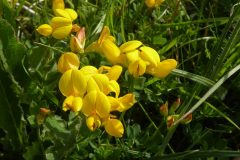 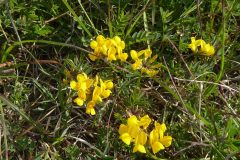 Alder Beetles
We found around 50 of these handsome blue beetles on the young leaves of Alder trees which were planted by the River Went in Brockadale about 5 years ago. Bob Marsh (beetle expert) confirms that although they are found in the area, and particularly around Doncaster their main distribution is in the south, with few recorded between the 2 populations. 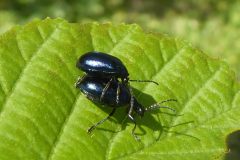 The beautiful weather has continued and flowers and insects have responded by coming out in their thousands. The problem now is that we desperately need rain because the limestone meadows dry out easily and the south-facing ones are hot as well.

Early Purple Orchids have appeared, but some are rather stunted because of the drought. South-facing meadows have Spring Cinquefoil, a scarce resident which is at its best in April. 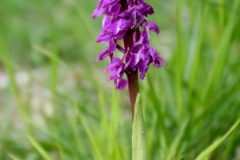 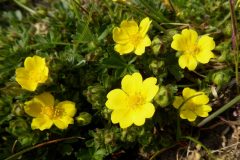 One of the most obvious insects in the meadow is the Dark-edged Beefly which hovers and then zips away. These flies are parasites of various Mining Bees which create burrows in bare soil in which they lay their eggs. The beefly moves in and lays its own eggs in there so that its young can feed on the Mining Bee’s larvae. 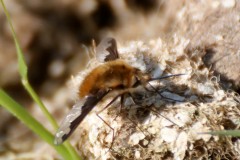 In the woodland, Bluebells take over from Wood Anemones (which have been in flower for the past 4 weeks). Wild Garlic is spreading rather aggressively in some areas, but a much more modest flower is that of Goldilocks, which never manages to produce more than a few petals. There is an abundance of Long-tailed Tits in the valley this year, maybe due to the mild winter. 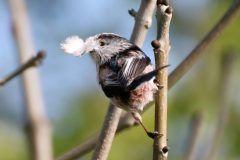 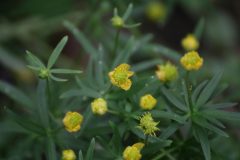 In the wall of an old stone barn in the village of Kirk Smeaton there is a colony of Hairy-footed Flower Bees. These rather handsome yellow-legged bees produce burrows in the soft mortar of the old building. Unfortunately for them,a parasite is watching and also will lay its eggs in the hole too. This parasite is the Common Mourning Bee. It is surprising that any Flower Bee larvae survive, there are so many parasites! 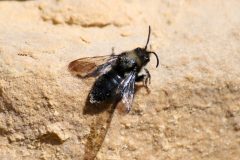 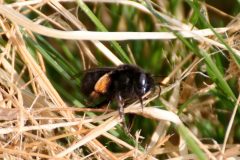 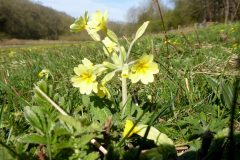 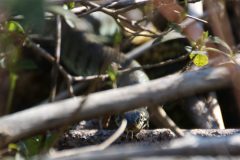 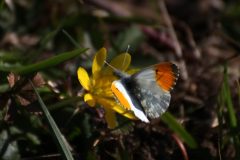 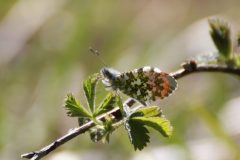 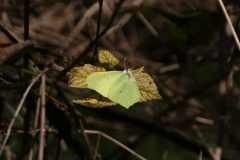 Wood anemones, cover the south side of the river Went valley between Brockadale and Wentbridge in their hundreds of thousands (maybe millions) 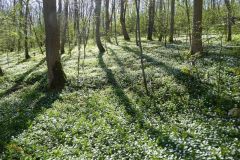 The ferns – Adders Tongue and Moonwort grow on the south side  of the valley together, in a meadow. They are only just emerging now in early April.. They are difficult to find when the vegetation grows up around them. 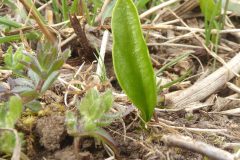 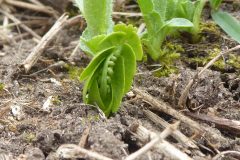 Rue-leaved Saxifrage and Spring sedge grow in a meadow on the north side of the valley. Rue-leaved saxifrage is very tiny and easily overlooked. The flowers only last for a short time in early spring. 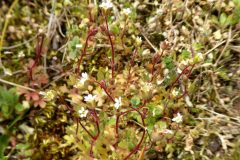 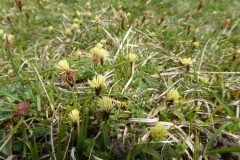 Some more photos from Brockadale this morning. The Brimstone was lying flat and sideways against a bramble leaf, facing the sun to warm up. The orange-tip was unusually small and early in the season. The Grass Snake was on a pile of logs where we sometimes find Common Lizards, but slithered away after checking us out. It was a female at least 4ft long. The false oxlip – the hybrid between cowslip and primrose –  was growing amongst cowslips, and we have more primroses this year than ever. 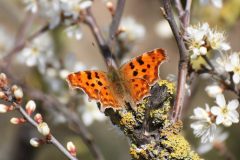 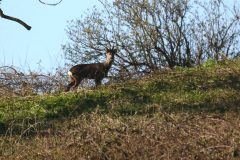 Our first sighting was of a fox happily eating something in the grass near the village in the middle of the day – Joyce’s little camera couldn’t cope with the speeding fox. There were Celandines everywhere, lots of Barren Strawberry and Cowslips just coming out. Joyce also found the first Rare Spring Sedge spikes of the year.

And a who-dunnit – we came across two Buff-tailled Bumblebees which had been completely hollowed out from the tail end right to the head. Who would do such a thing? 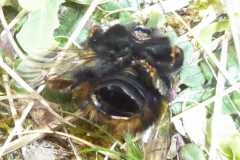 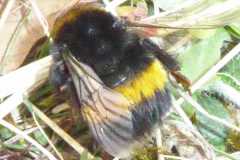 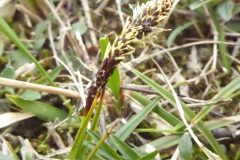