The months of September and October always have great interest for me because of the prevalence of galls, particularly on Oak trees and this year one particular gall has really attracted my attention and that is the Silk Button Spangle Gall.

Edward T. Connold in his book “British Plant Galls” gave this brilliant description of these beautiful galls. “The entire gall is covered, and also coloured by closely set, smooth, glossy, golden brown adpressed hairs and these impart to it a very real appearance of a diminutive silk-covered button.”

Silk buttons are very common but for those who don’t know what they look like, here is a photo of an individual leaf covered with them and another photo showing a whole branch of leaf- bearing galls. 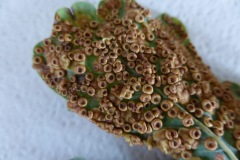 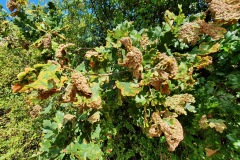 Many naturalists will recognise them but I wonder how many know anything about the gall causer, Neuroterus numismalis, and the fact that they are only a part of its complex life-cycle. This article is designed to enlighten you!

First the gall causer involved is a cynipid wasp, a small insect with a globular abdomen and the narrow wasp waist, typical of Hymenoptera. The abdomens of the females are packed with huge numbers of ova, the laying of which can result in leaves smothered in so many galls that they almost overlap and often cause the leaf to curl. The number of silk button galls per leaf varies but typically can be into hundreds. Edward Connold, in his afore mentioned book “British Plant Galls” noted that E.W. Swanton of the Educational Museum at Hastlemere picked three leaves of Quercus pedunculata and carefully counted the galls. On the first were 502, the second 558 and the third 681! Arnold Darlington in “Plant Galls in colour” states that over 1200 have been counted on a single leaf.

Silk button spangles represent the asexual or agamic part of a life-cycle which involves alternating sexual and asexual generations causing different galls on the same species of oak tree ie Quercus pedunculata or Quercus robur; the first in summer (Blister galls) and the second in the autumn (Silk Buttons) This alternation of generations is partly parthenogenesis where reproduction occurs without the presence of males, producing only asexual females and partly sexual, involving both male and female wasps. This is a reproductive strategy to allow reproduction in the late winter/early spring where the conditions are not conducive to sexual reproduction. Having two generations per year is also referred to as Bivoltine.

The sexual generation Blister galls are initiated in the Spring. They develop as convex blisters on both sides of the oak leaves and initially are green, making them more difficult to spot than the Silk Buttons. The slightly raised dome on the upper side is matched with a bulge on the underside and has a central pimple, from which radiating lines stretch to the edge. A single larva Iives inside making the gall uniocular.

When they mature they turn brown and are much more obvious. The photographs below, taken in late September, show the upper and lower surface of an oak leaf bearing several Blister galls with emergence holes where the wasps ate their way out of the galls in April or June. 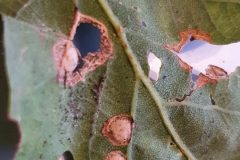 February/ March: Asexual females, capable of producing eggs without fertilization, emerge from Silk Button Spangle galls, fly up to the canopy and lay their unfertilised ova in the expanding leaf-buds leading to the Blister galls of the sexual generation. Once the egg has hatched a cavity forms in a swelling pad, the larva crawls into it and starts to feed initiating the formation, by the host, of layers of nutritive cells which provide a safe haven and a source of food until it’s ready to pupate.

April: The continuous feeding of the larva results in the full development of the Blister gall. They are each about 0.3 cm in diameter and project from both surfaces with narrow ridges radiating from a papilla on the upper surface.

May: The rapidly growing larva pupates.

Late May and June : Males and females emerge, mate and the females lay their eggs on the underside of the leaves, initiating the asexual generation of Silk Button Spangle galls. Each one is laid in a small cavity next to a vein and the formation of gall begins. The disc shape of all spangle galls results from the feeding pattern of the larva which is in a horizontal plane. The spangles are attached to the leaf blade by a small pedicle and initially no mark appears on the top of the leaf.

August onwards till Autumn: Silk Button Spangles are in evidence.

September/October. The mature galls fall with the leaf on which they are attached and unlike most galls the spangles continue to develop. The larva finishes off the nutritive cells, pupates and overwinters in the gall.