During our search for mosses on Lindholme Colin Howes discovered a collection of Long-eared Owl pellets. I collected a few and initially dissected four. In order to clean the bones of fur and hair I soaked the pellets in warm water and bleach. The Photograph 1 shows the bones found in the first pellet, hereafter referred to as Pellet A. 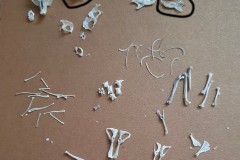 As you can see from the two skulls, Pellet A contained the remains of at least 2 individuals. This pellet contained examples of a variety of bones, most of which were only replicated in the other pellets so I decided just to concentrate on this one On closer examination of the skulls I discovered that both had gaps between the incisors and cheek teeth indicating that they were both rodents. Taking a closer look at the highlighted lower jaw (Photograph 2.) I could clearly see 6 root holes where the teeth had fallen out indicating that is either the lower jaw of a Wood Mouse Apodemus sylvaticus or a Bank Vole Microtus agrestis. However the shape of the upper edge of the jaw posterior to the tooth holes indicates Wood Mouse. This would be more likely anyway since one of the skulls ( highlighted in black on the first photograph ) is that of a Wood Mouse. 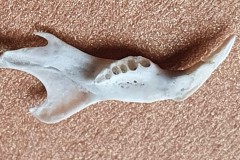 The skull highlighted in black (Photograph 3), shows the specimen has three teeth with knobbly cusps or crowns with worn down grinding surfaces indicating that this is an elderly specimen. In murids (mice and rats) although the gnawing front teeth (incisors) grow through life, their molars (back teeth) wear down through eating abrasive food (seeds etc.).The pattern of the root holes shown in Photograph 4, ie 4 in the second molar and 3 in the third molar indicates that it is the skull of a Wood Mouse. 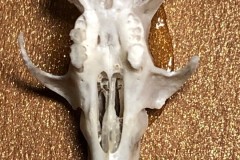 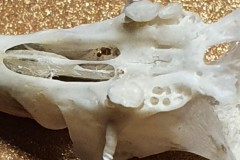 The other skull in this pellet and the skulls in the other three pellets belonged to a Field Vole Microtus agrestis. Here, in Photograph 5, you can clearly see the bold zig zag pattern on the grinding surface of the Field Voles teeth. In Photograph 6, you can see the jagged sockets left when the cheek teeth fall out and the notched incisor. 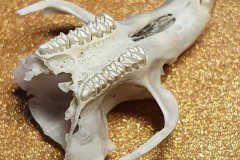 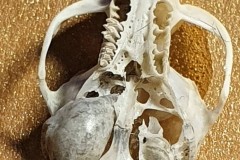 Photograph 6 of a Field Vole skull is interesting because the skull is almost intact, whereas many skulls (particularly mice ) break up either in the formation of the pellet or when they’re being dissected. On the left hand side you can see a grey bulbous structure which often falls away from the skull and is found separately . This is the auditory bullae, the part of the skull which covers the inner ear. At the very lower end of the skull you can see a large opening known as the foramen magnum. The foramen magnum allows key nerves and vascular structures passage between the brain and spine. Namely, it is what the spinal cord passes through to enter the skull. The brainstem also passes through this opening.

Identifying the function of other bones in the pellet was easy so within Pellet A you can clearly see examples of scapulas, arm bones, leg bones, hip bones (pelvic bones), ribs and vertebrae. Attributing them to particular species is impossible. However I did find two sets of pelvic girdles which are obviously from two different species and probably one male and the other female. 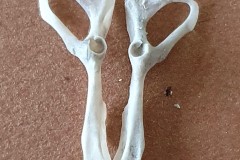 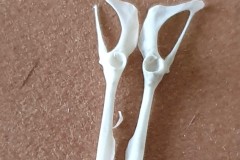 The first set, in Photograph 7, have a thicker pubis (ventral part of the hip girdle) indicating that the specimen is male and the second set in Photograph 8 have a very narrow pubis, indicating that the specimen is female. The shape of the obturator foramen (the gap in the hip girdle) is different in the two sets and this characteristic can be used to distinguish between Murids (mice and rats) and Cricetids (voles etc) See Photograph 9 from “Mammals of Britain- Their Tracks, Trails and Signs“. 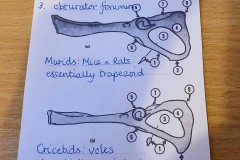 The two species in Pellet A, identified from the skulls, are Wood Mouse and Field Vole so it’s highly likely that the first pair of pelvic bones, having the more trapezoid shape belong to the mouse and the second set, having an essentially semi-circular opening, belong to  the vole. A few days later I decided to opened some more pellets hoping to identify the remains of species other than Wood Mouse and Field Vole. The first 4 only revealed more Field Vole skulls but the fifth pellet, hereafter referred to as Pellet B, was much more interesting because in it I found a bird’s skull, see Photographs10 and 11. 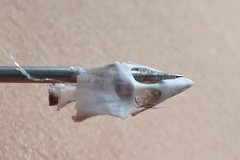 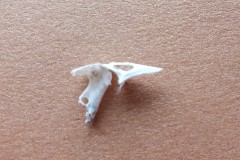 I also found a collection of limb bones and vertebra which were substantially bigger than the ones found in Pellet A, as photographs 12, 13 and 14 illustrate. 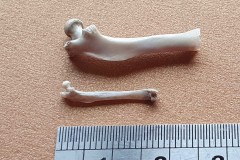 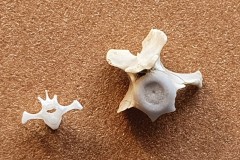 Another interesting bone found in Pellet B which is perhaps part of a tail ie a caudal vertebra is shown in Photographs 15 and 16. 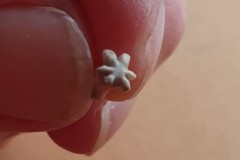 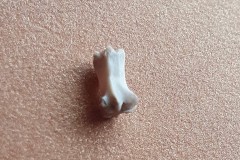 And finally Photograph 17 of another bone from Pellet B, which I can’t identify. 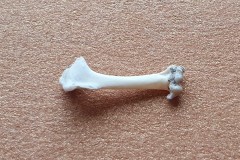 There were no skulls or lower jaws in Pellet B making it difficult to identify the species the bones represent.

Note: According to “Mammals of Britain- Their Tracks, Trails and Signs” Field Voles are the most common prey of all owls except the Tawny Owl.