Five members attended this expedition on a pleasant warm afternoon. The objectives were to look at orchids and other meadow plants, and to observe any other creatures that came our way.

We walked down Outgang Lane beyond the barrier and across the railway bridge, proceeding between hedgerows to a bend where we diverged on to a grassy field and hillside. In the hedge we found what looked like tall spinach, but was indubitably the cultivated form of sea beet (sugar beet; mangold wurzels etc.). A plant list is attached. There were two colonies of field rose in the hedge. A very bristly poppy turned out to be the mundane corn poppy. There was much dogwood in the hedge, some forming small trees.

Going down the ferny hill, we encountered occasional common spotted orchids and a lot of yellow rattle. The predominant grasses were cocksfoot, Yorkshire Fog, red fescue and false oat grass. A pheasant flew off noisily. We descended the slope down to the Low Common cautiously. A partridge whirred away across the common. Crested dogstail was common among the grasses here, and there were more spotted orchids and a few twayblades. The Low Common is famous for meadow thistles, but they appear in a very narrow window and I have always missed them. There was a colony of lady’s bedstraw emerging. Further on, there was a forest of seedling marsh valerian, carrying its seeds in curious pappuses (or pappi?). In this area there was abundant glaucous sedge and one area of common yellow sedge.

We then walked through the wood by the railway line to the Far Common. The wood is composed of oak, silver birch, hazel, sycamore, rowan and aspen, with the odd yew and holly. Much garlic was going to seed. We emerged on to the Far Common by the pedestrian railway bridge by which we used to approach from the Tickhill to Maltby road, parking opposite the departed colliery gates. In days of yore, (well over 20 years ago) the common was dotted with birch trees, but most of these have been cleared, giving a vista of grassy meadows like the prairie. Here were numerous scattered butterfly orchids. Those examined were the greater species, but we could not check every one. Rough hawkbit added a dash of yellow and orange to the ensemble. There were plenty more spotted orchids. There was tor grass among the herbage, and much fairy flax.

We drifted back along the edge of the trees. Returning to the Low Common we found a colony of hairy sedge on the rutted track. Agrimony displayed on the woodland edge. In a damp corner, a colony of reed sweet grass presided over a city of nettles. On the common we found tufted hair grass and great plantain s on the edge of the path. We walked up the track back to Outgang Lane.

Wood next to railway: 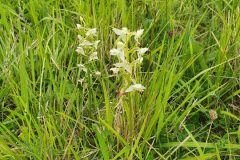 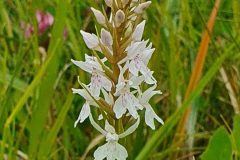