Five members present who met at 7pm in the car park at SE544039 and walked through the park via the upper, middle and lower Lakes.

The Green-flowered Helleborine Epipactis phyllanthes, is deemed to be Nationally Scarce in Great Britain and in the north is regarded as “a very rare orchid” occurring at restricted sites along coastal dunes in Lancashire and Cumbria, at two adjacent sites on the Yorkshire Wolds and along the Permian Magnesian Limestone ridge through Yorkshire, Durham and Northumberland where it occurs on post- industrial sites.

The plant was first discovered in Cusworth Park (SE5503) in 1975 by Dr John Hodgson of the Unit of Plant Sciences, University of Sheffield. This was in Grey Poplar Populus x canescens woodland on the north bank of the middle lake. It was again encountered here in July 1998 by Joyce Payne and CAH, three spikes were present in September 1999 and one in July 2000 but the site was destroyed by the removal of the woodland and re-engineering of the lake during the winter of 2003-04.

What is now known to be the main Cusworth colony, located in the narrow belt of damp riparian Grey Poplar woodland between the eastern side of the lower lake and the deep ring drain of the adjacent arable land, was first noticed in 1986 by Martin Limbert (of Doncaster Museum) and has been monitored here ever since by a succession of local botanists. This population is regarded to be far larger than other Yorkshire colonies (with a maximum count of 100 plants in 1999) and is comparable with the celebrated population at the Ainsdale NNR, Lancashire.

This year, owing to the driest spring and summer on record, there was no sign of the Helleborines in their usual areas along the shaded path along the east side of the lower lake. However, the survey met with  success as Catherine found a diminutive specimen growing from the dry earth over the drain from the basin pond and the team found a further seven healthy plants in a new area beside the path on the western side of the lower lake. These may have spread from a single large plant discovered by Ian Mcdonald and CAH of the Doncaster Nats in August 2004 at a new site near a venerable oak (now removed) on the western bank of the lower lake.

The Green-flowered Helleborine Epipactis phyllanthes was described New to Science in 1852 by the Rev. George Edwards Smith, who discovered it in Phyllis Wood, Westdean, West Sussex in 1838-39. Interestingly Rev. Smith served (1844-86) as curate of St Wilfred’s church Cantley and was an extremely active botanist during his period here. However, he does not appear to have been aware of any Epipactis species at Cusworth or elsewhere in southern Yorkshire.

More background information on the Cusworth population is available in The Naturalist (2015) 140: 48-56, a copy of which is in the Society archives.

This flat sandy site in the floodplain of the River Ryton is one of a series of restored flooded sand & gravel pits. The visit took place on a hot sunny day after a period of dry weather. Along sunlit sections of perimeter paths the Butterflies were particularly numerous and active.

There’s certainly a lot going on in your Dane’s Hill Hogweed umbel photograph. The insect ‘top middle’ is some form of Hymenopteran … but what?

On hot sunny days  when we’re all flagging from the heat, perhaps the best ploy is to grab a few shots of Buddleia or Umbelifera flowers … Giant Hogweeds are some of the best (!), retire to the shade or return home and spend the rest of the day identifying the nectaring insects with the help of a library of identification keys and the internet. 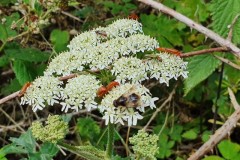