Bright clear skies but a gusty North Westerly wind (the last peripheral gasp of Storm Malik) which had removed most of the autumn leaves and brought down a number of dead branches.

To shelter from the wind we walked along the wooded disused railway embankment (recording area 6) as far as the Sluice and the Butterfly Bank (recording area 5), calling in at bird hides 1 and 2 en route.

Since our last visit to the sluice area the River Dearn seems to have overflowed, removing most of the surface vegetation between the sluice spill-way and the river bank, though a few hardy Broad Docks had survived in the sea of mud.

Three samples of mosses were collected for later identification. These were from the base of tree trunk, a rotting log and a rotting tree stump, all within SE501007.

Two White Deadnettle were in flower by the embankment path (SE501006)

Nora took photos of a demure clump of Snowdrops in flower (SE501006) [first seen on a Nats outing in 2022] and by contrast, photographs of an amazing gall-like colony of concretions on the lower trunk of a tree on the north-east facing embankment.

Since the car park was the site of the now demolished Denaby Halt Railway Station, opened in June 1912, it is likely that the Snow Drops and other cultivated species like Garden Privet are survivors of the local railway/social history. 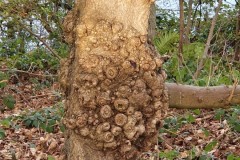 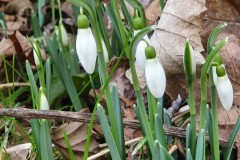 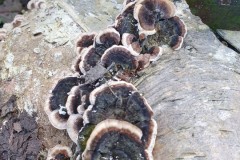 Meet at 10:30 in the reserve car park for a walk to find wintering ducks, geese and waders. Bring lunch.
Leaders Joyce & Paul Simmons.

Nine members met in the rather busy reserve car park at 10.30. The car thermometer read 3 degrees, so pretty chilly. There was no wind, so the bright sunshine made it feel quite mild. The paths were frozen, which was good, but so was the water, not so good. Here and there there were patches of open water, kept ice-free by swimming ducks.

Therefore, the numbers of wildfowl were lower than anticipated but the large number of bird feeders, Teasel seeds, Pine cones and Alder seeds meant there was lots of food for small birds.

We visited several hides, but these were not very productive  because of the frozen lakes. The walk around the reserve was pleasant in the sunshine and we saw lots of birds along the route. Hazel catkins and singing Robins were the only signs that spring must be on its way. The very large hide where we arrived at lunchtime overlooked an area of open water, perfect as a backdrop for sandwich munching. The temperature had risen to around 8 degrees by then, though the sunshine faded afterwards, and we left soon after 1pm. 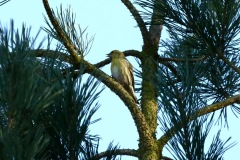 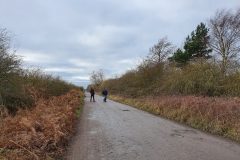 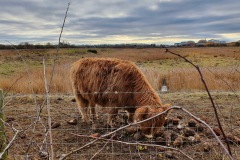 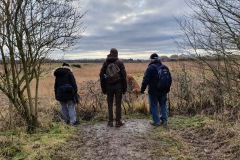 P.S.
Strong Fox scent was present along the northern boundary path and at odd points along Dryham Lane.
Fresh Mole Hills were present at intervals on the verges of the perimeter path.
The geological exposure between the south-west corner and the Owl box tree gave an interesting illustration of the sediments of the post glacial Lake Humber and the effects of ‘cryoturbation’ of surface deposits caused by post glacial ‘Tundra’ conditions.
Colin Howes

The Reserve was chosen some months in advance with the idea of a nice pub meal at the Ship Inn, Newington after the walk. With the extraordinarily high level of COVID 19 case this plan for a pub lunch was abandoned.

Much of the reserve consists of an old sand and gravel quarry. Habitats include ponds, oak and birch woodland, many curious mounds of old topsoil or sand from the quarrying, and some bare ground with little of no topsoil. Perhaps the main botanical interest is the mosses and lichens colonising the quarry workings but we would have liked more expertise in this field. A visit was made to a healthy-looking intermediate polypody (Polypodium interjectum) a notable plant at this site.

Observations
Jim pointed out the ‘wadi’, an erosion gully and delta in the sandy north-eastern corner of the large main quarry hollow, known as the Rose Bowl. This wadi feature had appeared on one day during the extreme rainfall event in June 2007.

Colin observed that a vertical south-facing escarpment on one of the otherwise grassy and mossy sandhills had been peppered with the nursery holes of mining bees and wasps and would be worth visiting by aculeate entomologists during the summer months. It showed that in this, one of Yorkshire’s most southerly sandy heathlands, it would be worth artificially creating more of these south-facing escarpments to encourage this aspect of the county’s entomology.

The group noted the many cup and ‘bushy’ forms of Cladonia lichen and the bright gingery spore capsules of bodies of Polytrichum moss.
The ‘greening’ effect of the nitrogen leaching from the scattered rabbit latrines was particularly noticeable in the most sandy areas.

Small orange cup fungi, possibly eye lash fungus were also seen, as were the dried remnants of a puffball.

A worthwhile rediscovery was of the leafy liverwort found on the narrow mossy path to the east of ‘Christmas Tree Wood’. First found and identified by Nats member Colin Wall in 2008, this species is occasional on acid sandy grassland over millstone grit on the Pennines, is very scarce indeed in lowland Yorkshire and Colin’s record was a new species for the Doncaster area. It was found recently growing in a carpet of Dicranum moss – see photo below.

Christmas Tree Wood comprises a even-aged closely spaces plantation of Black Pines (Pinus nigra). Amongst the pine needles were small drifts of the characteristically pointed leaves of the red oak (Quercus rubra). A mature tree was eventually located on the western side of the
woodland.

On emerging into the adjacent rabbit-nibbled turf, a series of small sand mounds was found, approx 6 inches across and some reaching about 3 inches in height. They looked like miniature mole hills, complete with a small ½ – ¾ inch emergence hole. While it was tempting to conclude that we have made a discovery of a species of previously unknown dwarf mole it is more likely that these were the work of some
form of mining bee or wasp, however the large size of the excavations is unusual and warrants further investigation to see
what might emerge in Spring.

The young stages of birch polypore (Fomitopsis betulina) fungi (Photo, below) were seen on a dead and hanging branch of a mature birch on the northern edge of the woodland. The large, furry grey-green leaves of the mulleins (Verbascum spp.) were very noticeable as the group
walked across the rabbit-grazed tuft.

The group exited the Reserve onto High Field Lane to take a view over the active quarry on the northern side of the lane which provide exposures of the sand of the ‘Great Sandy Deserts’ of the Triassic period. The group returned to the Reserve, via the northern pedestrian entrance past young ash trees which were clearly showing signs of ash die back.

The group were guided to the western corner of the reserve where a large plant of the Intermediate Polypody grows. The plant was originally found on the site by Louise Hill and John Scott in 2012 while undertaking field survey work for a revised Management Plan for the Reserve. A single detached leaf was found amidst the leaf litter on a sloping bank in the north-western corner of the Reserve. After some searching, the small ‘mother’ plant was eventually located at the top of the dry sandy bank. The plant was clearly suffering from repeated rabbit grazing so a pile of dry twigs was used to create a barrier to help prevent further leaf loss. Several more plants were found elsewhere on the reserve.

Accurate identification of Polypodium ferns relies heavily on the microscopic details seen in the sporebearing parts known as the ‘sporangia’. These sporangia are contained in the small yellow circular structures know as sori which can be found on the underside of the fertile fronds. (see photo, below).

The sporangium have a conspicuous row of thick walled cells round their tip called an annulus . When the spores mature and the moisture in the cells changes, the annulus splits at one end, folds back and catapults spores out into the environment. The inset photograph, below, shows the empty spore capsule amongst the ones still intact and is surrounded by released spores. The ‘ladder’ of thick-walled annulus cells is visible. The number of cells in the annulus is the determining feature in identification of the species.

Birds
A buzzard was seen flying over the main ‘Rose bowl’ area in the centre of the reserve. Two jays and several redwing were also seen. As the saturated but engrossed group made its way back to the study centre, alarm calls of a Blackbird and Great tit accompanied the swift low attacking flight of a female Sparrowhawk, a flight line which took it like a flash along meandering paths through the birch/willow scrub.

Post Script
Whilst enjoying our celebratory hot drinks and mince pies provided by the Austerfield Study Centre, members bought over £30 worth of books from Dorothy Bramley’s library. Afterwards, three of the group (JB, PS, JS) drove about a mile to see Great White Egrets in part of the Idle washlands near Misson. This was the world’s easiest ‘twitch’ as one bird was standing not far away in full view in the first flooded field off Slaynes Lane. Two others were seen further away.

Report compiled by several of the members present. 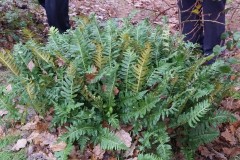 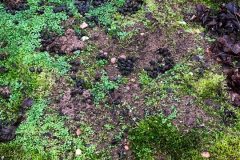 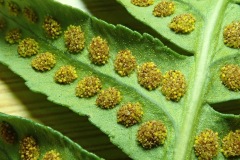 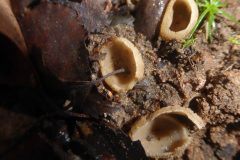 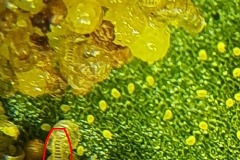 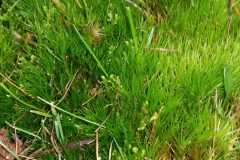 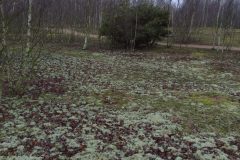 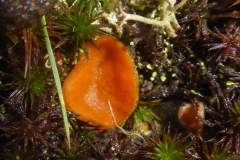 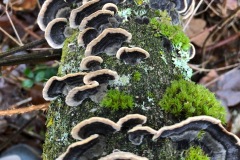