I was pulling out some Cleavers (or Sticky Weed) that had been missed at the end of our garden. It had grown long and was starting to seed. I was just putting it in my trug when I heard a quiet rustling noise and noticed a movement within it. When I looked I realised that a large dragonfly was tangled up in it. Having my camera to hand I grabbed it and photographed the dragonfly before setting to to try to release it. It took me several minutes of very careful work to remove the sticky stems from it without damaging its beautiful wings and afterwards it sat happily on my hand while I picked up my camera again and tried to photograph it. It was a female Southern Hawker, Aeshna cyanea. Eventually I put it down by the pond but it seemed to want to follow me as it turned and moved in my direction every time I moved. But then I noticed a small warbler, possibly a Chiffchaff, come to try and drink from the pond. As I turned my attention to the bird I noticed with relief the dragonfly fly off as if to say, “Oh she’s not bothered about me any more”. I’m so glad it survived. It was absolutely beautiful and I felt so privileged to have experienced that interaction as it undoubtedly was.

As for the bird – is it a Chiffchaff or is it a Willow Warbler? Its feathers were more olive green than yellow green but it’s legs don’t look especially dark. Sadly it didn’t sing. 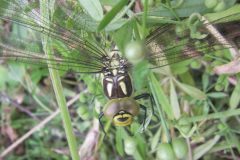 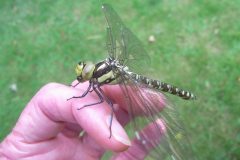 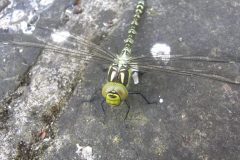 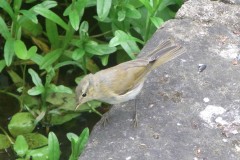 John and I spent a couple of productive hours in our churchyard at Finningley this morning. While there I was delighted to count 37 flower heads of Lady’s Smock, Cardamine pratensis. When I was there on 6th May there was no sign of a single flower but the rain of the last couple of weeks has brought some benefit. I was also pleased to see a good colony of Thyme-leaved Speedwell, Veronica serpyllifolia, just inside the lych-gate. This is the largest number I’ve seen in the churchyard although there are usually more to be seen in the new graveyard depending on when it is mown. 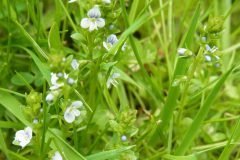 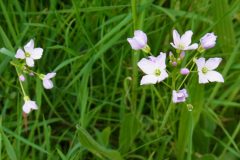 I enjoyed my first outing with the Nats since the beginning of last year when we visited RSPB Old Moor reserve today. Probably the highlight for me was spotting and managing to photograph an immature female Common Blue Damselfly, Enallagma cyathigerum. 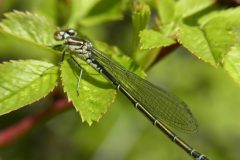 Walking round Thorne with our son, David, on Sunday as we walked along the path beside the golf course towards the recreation ground we heard our first Cuckoo of the year. The call appeared to be coming from the canal side. As we walked across the recreation ground I looked up at the tall trees that were growing beside the canal and spotted a bird perched on the topmost branch of one of the trees that was still bare, presumably an Ash that was still in bud or suffering from Ash dieback disease. The bird had the appearance of a Cuckoo though it was some distance away and once it flew off I stopped hearing its call.

Later we walked through the churchyard of St Nicholas Church and along the road beside the graveyard where I noticed thriving colonies of Wall-rue, Aspenium ruta-muraria, and Maidenhair Spleenwort, Aspenium trichomanes, growing in the mortar of the old brick wall.

Despite the foggy start to the day the sun had pushed through by mid-morning and it soon warmed up.  Today has been the best so far for spotting butterflies in our garden in Finningley.  We had both male and female Orange Tips, Anthocharis cardamines, Small White, Pieris rapae, Large White, Pieris brassicae, Brimstone (male), Gonepteryx rhamni, Small Tortoiseshell, Aglais urticae, Peacock, Inachis io, Speckled Wood, Pararge aegeria and Holly Blue, Celastrina argiolus.  It was my first sighting this year of both Speckled Wood and Holly Blue.  I was delighted to have seen 8 different species in the garden in one day in the middle of April. The only white missing from my list was Green-veined White, Pieris napi, but it may well have been present (just not spotted by me) as I did record one yesterday.

Aubretia and Honesty seem to be the food plants of choice for those butterflies that were seen feeding, although the Brimstone, Gonepteryx rhamni was enjoying one of our Wallflowers.  Almost always I find the whites prefer using up their energy stores rather than refuelling as they seem to prefer patrolling up and down our warm south facing bank.  By contrast I more often see Peacocks basking on warm paving or walls.  The Speckled Wood is another that I see resting, often on foliage, if it isn’t patrolling up and down our Hawthorn hedge.  Typically the Holly Blue was seen checking out the Hollies in the hedge. 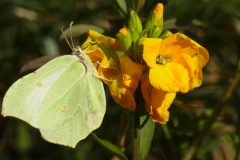 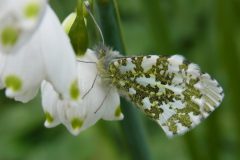