On arriving at the reserve we were met by an RSPB representative who gave us an indication of where there had been sightings of waders and birds of prey. She mentioned the Western Reedbeds which was where we were heading.
Before setting off round the reserve we took time to view the Little Owl which is still in residence around the huge piece of machinery used to dig out the land in order to create the lakes.
We didn’t need to walk very far before we had great sightings of Red Kite, Buzzard, Hobby and Kestrel. At a later point we had tremendously close views of the hobby, which I think was the highlight of the day.
The reed beds gave us views of a variety of waterbirds including Heron, Coot , Little Egret, Little Stint, immature Great Crested Grebe and Lapwing. At one point we had clear views of several Spoonbills.
Although the main emphasis of the day was bird watching there was also much of botanical interest and the occasional dragonfly was spotted.
The weather was perfect; sunny with a slight breeze and the blue sky filled with white clouds was a perfect backdrop to the flocks of Canada and Greylag Geese which kept relocating on the reserve.
We arrived back at the car park at around 2.30pm.
6 Members attended. 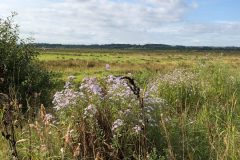 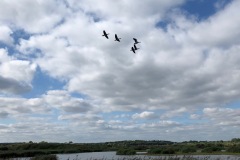 The site is a wonderful place to search for many aspects of natural history because there are many varied habitats. Meadows near the car park, established sites to attract butterflies, open woodland and grassland, which during an early meeting led by Jim was host to a variety of orchids.

During our visit over seventy different galls were discovered. Sixteen different galls were seen on Oak trees, including the sexual generation of Andricus glossulariae galling catkins of Turkey Oak, Quercus cerris, and the agamic generation galling the acorns of Pedunculate Oak, Quercus robur, forming blunt rounded spines. Alder was host to the common mite galls, Eriophyes laevis, which form pimples all over the leaf, and Aceria nalepai, forming slightly larger pimples along the central vein.

There was also the dramatic fungal gall, Taphrina tosquinettii, enlarging the leaf. Beside the Lake Lime tree leaves were host to distinctive galls, the mite Contarinia tilarum, which swells the leaf stalk, and Didymomia tiliacea, forming woody conical swellings on the leaf. In its early stages a cylindrical inner gall protrudes from this cone, later falls to the ground leaving a hole in the outer gall.

Robin’s Pin Cushion gall was seen on Dog Rose, formed by the wasp Diplolepis rosae. Another gall was discovered on the undersides of rose leaves, the smooth pea gall, formed by the wasp Diplolepis nervosa. While checking out the site in late June, I saw an uncommon midge gall, Lasioptera rubi, enlarging a lower stem of Bramble. It is a pity that by our September meeting the Bramble area had been trimmed.

In Dyscarr Wood wherever we saw Spindle, most leaves had edges rolled by the mite gall, Stenacis euonymi. On the edge of a wood was a Silver Maple tree with many leaves covered in reddish pimples formed by the mite Vasates quadripedes.

Six members attended the meeting along with a BPGS and Sorby member who joined us from Audenshaw, Manchester. 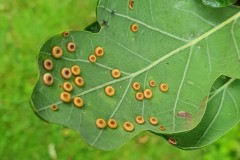 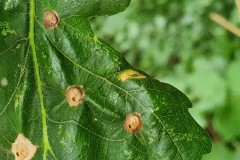 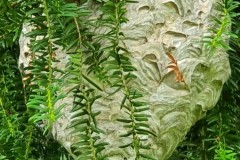