Description
The attendees met in the car park and split into two parties, one member concentrating on plant gall survey on the southern side of the reserve while four others walked alongside Pastures Road to access the marsh on the northern side of the lake. Survey commenced at 10.30am. The leader joined the party in the marsh at about 10.40am. Water levels were perhaps a couple of inches higher than the preceding weeks due to recent heavy rain. There was evidence that grazing cattle had been in the marsh over the summer although no signs of the cattle themselves were seen during the visit.

The survey method used was careful visual inspection of standing and fallen clumps of vegetation looking for evidence of small woven nests. Full waterproof clothing, and water proof gloves were used. Umbrellas were also deployed. A smartphone with GPS was used to record the location of each nest. The Recorder also used GPS tracking to record the areas of search. NB the other surveyors searched in similar areas. 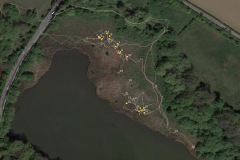 A barn owl was seen to fly over the marsh after the rain had stopped SE 50031 01005. Its arrival was not observed but one member was searching for mouse nests in long grass beneath a pole-mounted nest box at the time and it is possible that the bird emerged from the box.

Breeding harvest mouse confirmed. Mixture of tall monocots (primarily Phalaris arundinacea and Glyceria maxima) appear to be the favoured nesting locations. Nest height range from 50cm – 70cm high but in many instances the vegetation had already collapsed to semi-horizontal positions.

It was a mild autumn morning, mostly cloudy but bright with a blustery wind when six members and one guest were greeted by Kevin Gilfedder, our fungi expert for the day. We began our fungi search in the area of the churchyard to the east of the church near the group of 4 Silver Birches and saw immediately several Fly Agaric, Amanita muscaria, that had come up since I last visited 4 days earlier. Half an hour later and we had barely moved from this part of our spring meadow with lots to interest us including the Frosty Webcap, Cortinarius hemitrichus, aptly named with its frosted cap and web-like fibres connecting the cap to its stem. In this area a number of waxcaps were seen and being so small narrowly missed being trodden on. The yellowy-orange ones proving difficult to identify – did they smell or not and what did they smell of? We found the unusual green coloured Parrot Waxcap, Hygrocybe psittacina, tiny bright red Hygrocybe coccinea, the pure white Snowy Waxcap, Hygrocybe virginea and small forests of Blackening Waxcaps, Hygrocybe conica, that can be mustard yellow, orange or scarlet turning black as they age. A Club Fungus, either Clavulinopsis luteo-alba or helvola and Meadow Coral, Clavulinopsis corniculata were also found.

As we moved through the summer meadow area more waxcaps were seen and Club Fungi and Meadow Corals were found growing particularly on the mown paths. Being so tiny they were more easily seen among the shorter grass. There was some debate about whether the lilac Mycena pura found in the spring meadow and the similar Mycena rosea in the summer meadow were in fact the same species but in the end the decision was that both were present. But we all felt rather sorry for the aptly named dull Drab Bonnet, Mycena aetites.

Moving through into the new churchyard, in addition to those that we’d seen in the old churchyard there were also a number of different species. These included the realistic looking Orange Peel Fungus, Aleuria aurantia, groups of Glistening Inkcap, Coprinus micaceus in various stages of decay and also Sulphur Tuft, Hypholoma fasciculare, interestingly growing in clumps all around the edge of one of the graves as well as growing on a tree stump in another area. Russula amoenolens had us all sniffing again trying to identify the camembert scent of this Camembert Brittlegill. At the back of the churchyard a very attractive bracket fungus was discovered growing on a plank of wood, the gills on its underside were densely arranged and sometimes joined creating a beautiful maze like pattern. Close by bright orange blobs of Common Jelly Spot, Dacrymyces stillatus, were also found growing on the timber.

It proved to be a very interesting morning with 48 different species identified and many thanks to Kevin for his informative expertise. Fungi are certainly fascinating and diverse organisms and I look forward to our next foray into the world of fungi. 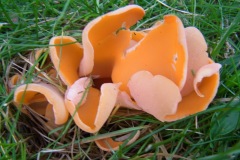 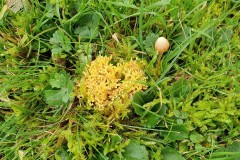 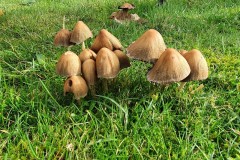 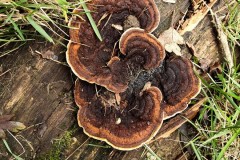 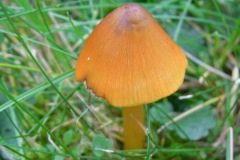 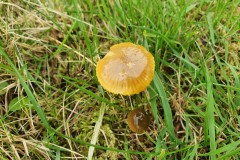 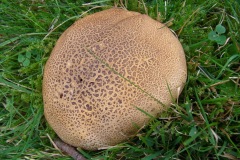 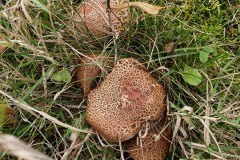 Thirteen members and one non- member met in front of the hall for the ad hoc Fungus Foray. We were joined by one more member later in the afternoon.

With the aid of a map, created as part of a report on selected veteran oak trees in the grounds of the Buddhists community, we pointed out the areas in which we were intending to search for fungi. This included habitats associated with the oaks, the quarry and the meadow. One other habitat, birch woodland, also became prominent in our search.

Almost immediately fungi were being discovered left right and centre and the group naturally split up as individuals started to make use of their various identification books and others fed them information or took photographs.

In the course of the day we found an enormous number of fungi, some we could identify from experience, some which were identified from observation of characteristics such as colour of gills, smell etc and some which we couldn’t be sure of. One member collected some samples with the intention of asking an expert mycologist to assist in identification.

We found a variety of fungal forms and several Fairy Rings. In the meadow we found two rather large rings, one of which was composed of Pestle Puffballs Hankea excipuliformis ( note the name change from Lycopodium ) and the other possibly Mosaic Puffballs Hankea utiriformis and in the woodland ride we found several composed of Lilac Bonnet Mycena pura.

All in all a very productive and interesting afternoon, well worth repeating next year!

In addition : A member noticed on the surface of a fungi a small millipede which, on later checking, was discovered to be Blanilus guttulatus – Spotted Snake Millipede. We also noticed many plant hoppers in the grass area which quickly settled on any surface at ground level. One of these, a tiny blue planthopper, was sent off for identification and was confirmed as Conosanus obsoletus. 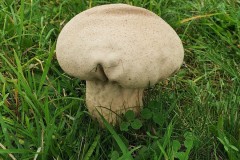 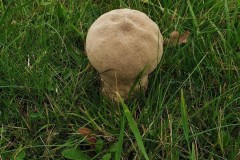 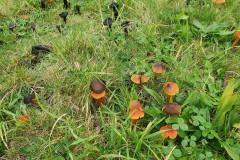 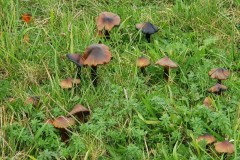 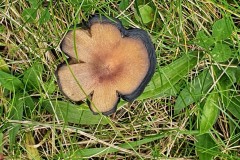 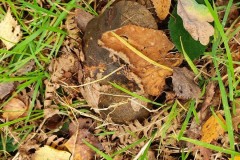 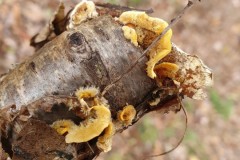 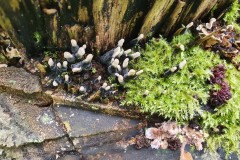 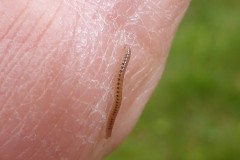 Six members attended on a pleasant October afternoon for this late season walk. Carr Lodge is a YWT reserve on the opposite side of the M18 link road to Potteric Carr, and many of us were unaware of its existence until last year. A small wooded area is open to the public but the large grassy part is closed.

Amazon Lakes (is this an official name?) on the other side of the M18 is new habitat. There are 4 acres of water (balancing ponds) created to absorb water during periods of heavy rain and to release it slowly to prevent flooding (to compensate for the large areas of new buildings and tarmac on previously agricultural land). They have been colonised by many water birds (Mute Swans, Mallard, Gadwall, Teal, Widgeon, Tufted Duck, Greylag and Canada Geese, Coots, Great Crested Grebes, Cormorant, Little Egret and Heron were seen). Late dragonflies noted were Common Darter and (probably, from the time of year) Migrant Hawker. Some very unseasonal Marsh Marigolds were in flower and it was noted that a small area of the shoreline of the first lake (M18 Lake on Google Maps) was heavily used by Mute Swans to defecate. What will grow there in future? 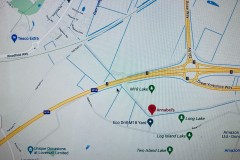 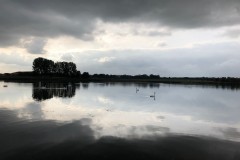 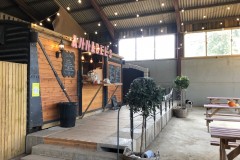 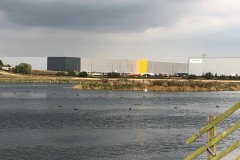 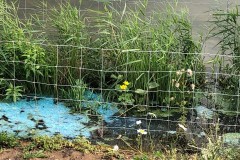