Seven members met up in the courtyard of the Visitor’s Centre and from there we entered the reserve and walked round the newly created Sensory garden, situated immediately behind the Visitors’ Centre. The planting of the flowerbeds was very impressive from the point of view of colour and texture. In amongst the beds were several bird feeding stations and bird tables where we saw great tit and robin. 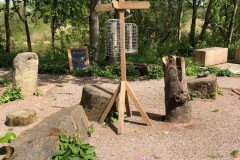 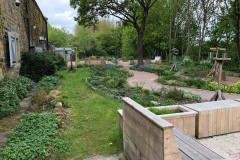 We then decided to take the Green Lane trail and spend some time birdwatching. The first hide we came to was the newly erected Family Hide which appears to be wider than the previous hide allowing more people to view at the same time. The photographs below show scenes from two of the hides. We saw a variety of birds including black- headed gulls, gadwall, little egret, oyster catcher and lapwing. 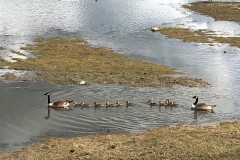 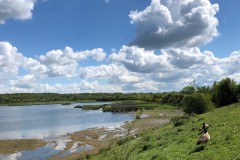 Cowslips were growing in abundance on the reserve, more than in previous years. Below is a photograph of cowslips and one of bush vetch taken by Tricia Haigh. 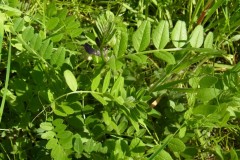 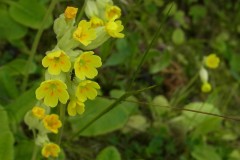 After lunch we walked round the pond areas where we found several sedges including Carex flacca, Pendulous sedge , False Fox sedge, and Lesser Pond Sedge. Interestingly while looking at the flowers of pendulous sedge I discovered an unusual flower which, as you can see from the photograph, looks like six flowers all arising from an individual stalk. I believe this is an example of fasciation which is caused by damage at the growing point by bacteria or genetic abnormalities. 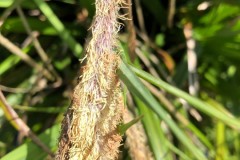 Although Old Moor isn’t in our area we decided to keep a record of species seen and these have been forwarded to Louise Hill so they can be passed on to Barnsley Record Centre.
Dawn Chorus – Sandal Beat Wood. (SE609037) 2nd May 2021

The visit commenced at 2pm and John led the group down Hawkhouse Green Lane. We walked through a meadow which John had seeded using hay from Sykehouse. Cowslips and Bluebells lined the hedgerow. The Crab Apple and Hawthorn blossom were on the verge of flowering. Many plants were noted including:

The group proceeded to the Bluebell wood which John obtained around 20 years ago and we walked in single file through the wood admiring hundreds of Bluebells. John pointed out one or two stumps of Oak trees, which were stumps even in John’s grandfather’s time. We also stopped to admire the Aspen copse. 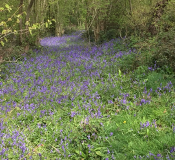 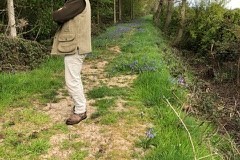 It was noted that the cooler climate of late meant fewer insects were in evidence but some Bumble bees were seen – mostly Buff tailed – and a couple of Solitary Wasps and several Orange tip butterflies were about. 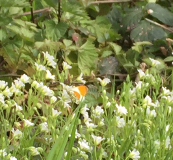 We circled back around the wood and then admired the three ponds John has created. Frogs were in evidence and two Red Data plants were observed – True Fox Sedge Carex vulpina and Elongated Sedge Carex elongata.

The ponds had many water violets, as yet to flower, and, among others, Marsh Valerian and Bladder Sedge were noted.

We investigated the relatively newly planted wooded areas with a variety of trees and found a ground nest full of eggs – unsure of species. 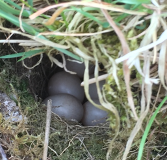 We returned through another field which contained a large patch of Lady’s Smock and a Midland Hawthorn Crataegus laevigata which is identified by its holly-like leaves and flowers with two stigmas. 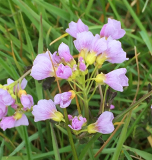