At 10.30 on the cold and frosty morning of Saturday 2nd January 2021 six Doncaster Nats members (+ one eager Welsh Collie) met at the northern car park of Brodsworth Community Woodland. Accompanied by a flurry of fine snow we walked via the eastern boundary path of the Community Woodland and a section of the Roman Ridge down to Hanging Wood, and Highfield Lake Country Park. 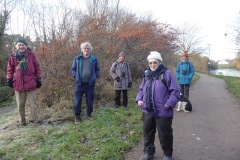 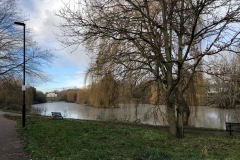 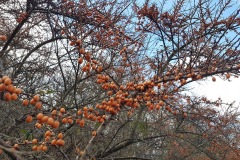 Conditions under foot were potentially treacherous with icy patches and numerous frozen puddles but appropriate footwear prevailed and there were no mishaps.

We entered Hanging Wood via the now abandoned mineral line of the South Yorkshire Junction Railway, which ran from the former colliery marshalling yard to the west of the Roman Ridge, east to join the LNER Doncaster/Wakefield line at Castle Hills/Radcliffe Moat. Not only does this cutting provide good exposures of the Permian Upper Magnesian Limestone, these exposures are colonised by populations of the attractive Harts-tongue Fern Asplenium scloropendrium, these plants shining glossy green in the otherwise leafless winter woodland.

Although in an otherwise heavily managed and artificial landscape, Hanging Wood gives every evidence of being a survival of native limestone woodland. It still contains limestone indicator species such as Dogwood Cornus sanguinea, Wild Privet Ligustrum vulgare, Ash Fraxinus excelsior and Wych Elm Ulmus glabra (though most of the Elms had succumbed to the fungal ‘Duch elm disease’ Ophiostoma novo-ulmi, signs of the disease vector, the elm-bark beetle Scolitus scolitus were abundant on dead timber.

Evidence of a calcicolous herb layer, still visible in the snow and frost, were areas dominated by the still-green Dog’s Mercury Mercurialis perennis and the dead dry stems of Wood false-brome Brachypodium sylvaticum and Hairy Brome Bromopsis ramosa.

The social history of the woodland is writ large in the presence of ornamental and commercial plantation species such as the occasional Horse Chestnut Aesculus hippocastanum, Beech Fagus sylvatica and the dominant species Sycamore Acer pseudoplatanus.

On the elevated parts of the woodland were remnants of coppiced Hazel Corylus avellana, now out-grown and in need of management but indicative of a former commercial use. Much of the Sycamore had also been coppiced but characteristically from waist level (rather than ground level) indicating the effects of timber removal for fuel during the Miners strikes of 1972, 1973-74, and/or 1984-85. Growth rings in the coppice re-growths would indicate which … a project for someone. This seems to be a fascinating hall-mark of woodlands adjacent to local mining communities. Other but depressing evidence of human activity was the spectacular amounts of litter and fly-tipping, even a burnt-out car, but all habitats in their way (?).

Additional exotics were present in the Highfield Lakes Country Park. These included shrubs of Sea buckthorn Hippophae rhamnoides, impressively full of berries, and spectacular water-side Weeping Willows (Salix babylonica) both on the island and the north bank.

Looking north across the lakes was the rather fine though much altered edifice of Highfields Hall. According Edward Miller’s The History and Antiquities of Doncaster (1804 p. 291) the hall was built in the late 18th century for Thomas Bradford by the Doncaster architect William Lindley. During the 1970s it was used as Woodland Park Working Men’s Club and is currently Woodlands Park Club & Restaurant.

Formerly the lakes had a considerable ornamental wildfowl population (see attached appendix) which effectively eradicated the riparian vegetation. On this occasion the lakes were frozen and we saw only one Mallard. A Grey Heron, working the Langthwaite Dyke, lifted from a stream-side willow on our approach.

The return walk took us past an apparently wrecked series of presumably abandoned allotments/small holdings, no doubt worthy of a biodiversity investigation. We re-joined the Roman Ridge where briars of Dog Rose Rosa canina were frequent, Jim noticing the red fibrous ‘Robin’s pincushion galls’ (also known as ‘Bedeguar galls’) resembled colourful Christmas tree decorations showing conspicuously against the thin layer of frost and snow. These natural baubles are caused by the larvae of the gall wasp Dipoloepis rosae. Nora noticed the terminal tips of a path-side willow were beginning to show signs of spring with buds revealing the silvery fur of pussy willow flowers, possibly of Salix caprea.

Cutting back to the car park along the frozen mud of the Community Woodland path, it was interesting to see elegant Roe Deer slots (footprints) amongst imprints of a range of designer trainers, walking boots and wellies.

Even in bitterly cold conditions with frost, ice and mud underfoot, it was heartening to see that the area was very well used by the public from three quad bikes, joggers, dog walkers and cyclists, to numerous family groups, some with pushchairs, some with toddlers.

I am told that Jack Lakin was an enthusiastic local resident who built up the population of wildfowl which he fed daily by donations of end-of-day left-overs from local bakeries.

The Doncaster & District Ornithological Society was keen to keep tabs on this extraordinary local collection in order to interpret the origins of exotic wildfowl recorded across the region.