Six members met in the courtyard outside the Visitor’s Centre at 10.30am on a cold and frosty morning. Despite travelling through a misty landscape to get to the reserve the sun was creating enough warmth for us to feel comfortable for most of the visit.

Initially the intention was to walk straight down the Green Trail to the far end but on discovering that Bramblings had been seen at Tree Sparrow Farm we decided to look through the viewing screens first. We weren’t lucky enough to catch site of those but we did see many other passerines feeding either on the ground or in the squirrel proof bird feeders. On the way to the farm we passed a small pond near to the Visitor’s Centre which was still frozen over.

We then walked along the   Green Trail where a female Yellow Hammer was spotted in one of the trees. Once in Wath Ings hide we were directed by a fellow birdwatcher to  a Peregrine Falcon on the far side of the wader scrape and it wasn’t long before a solitary Green Sandpiper was located close to the hide.  (See Tom Higginbottom’s photograph). The light at this point was perfect for us to identify species from their plumage. Teals, Wigeon, Shoveler and Pheasants were looking particularly magnificent. The full list of species appears at the bottom of this report and includes many water birds you would expect to see at this time of the year but of note we were only able to locate one Shelduck and we didn’t spot any Greylag Geese, Little Grebes or Great Crested Grebes.

Moving on to Water Scrape Hide we saw many species already listed whilst in Wath Ings Hide but we were also lucky enough to see a female Golden Eye feeding right in front of us. Looking through all the hides what we were seeing was waterscape surrounded by grassland which was where we saw male pheasants feeding. Several female pheasants were feeding on grass covered islands much closer to the hides.

By the time we reached the newly erected Family Hide we were getting ready for lunch so after a short session we adjourned to the covered in area in front of the Visitor’s Centre. By the time we had finished lunch we were beginning to feel the cold so decided to make just a short extension to the morning by going to see what we could find in the area in front of the Bittern Hide. This wasn’t very fruitful so we returned to Tree Sparrow Farm to check for Bramblings which once again were nowhere to be seen. However through the hedge we could see the car park and arrival of another member.

Two of us adjourned to the cafe for warmth and sustenance where we met up with one of our Plant Gall experts who had arrived during the morning and searched individually for galls, of which he found 10 species. 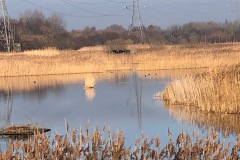 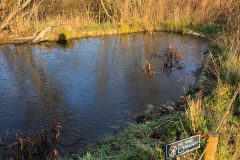 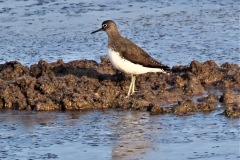 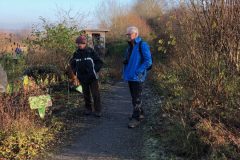