Leader: Geoff Carreck
Nine members attended this expedition on the afternoon of 24 August. The visit encompassed a wooded area, a hummocky sandy area popular with off-road motor cyclists, and a wet area around the gravel pits.

The weather was overcast, which accounted for the dearth of dragonflies, which were abundant two days previously. Few birds were seen, due to the time of year. The gravel pits often harbour fair numbers of tufted duck and pochard, but only two coots swam into sight today. Nevertheless, we managed to hear a green woodpecker. However, some interesting plants were seen, including the specialities of the site, bog pimpernel and yellow bartsia.

We walked from the lay-by on a track through the woods, carefully negotiating a burnt-out car. Several specimens of vervain, tutsan with ripe berries, and pale persicaria were noted near this landmark. As the path opened out on to a sandy plain, yellow-wort, scarlet pimpernel and perforate St. John’s-wort came into view. A lightly grassed open area yielded soapwort, evening primroses, marsh cudweed and leaves suggestive of heath dog violet (worth a return visit in the spring, as this species is under-reported).

We continued to a muddy area, exhibiting filamentous algae and an example of toad rush, diminished over the past two days by rabbits. Numerous examples of weld lay about the route. Reaching a promontory overlooking the gravel pit, we noted pale toadflax and a fuchsia in its stony bank. We descended to the west side of the water, noting field madder and hare’s-foot clover on the way, to reach a large patch of bog pimpernel. Skirting the gravel pit, we found common club-rush, bulrush and Cyprus sedge. Further along we discovered more bog pimpernel and yellow bartsia, and a colony of bristle club-rush.

Returning across the sand, we found rosettes of a stonecrop, probably the Caucasian (Sedum spurium).
Several examples of bugloss (a declining plant in Britain) were observed. 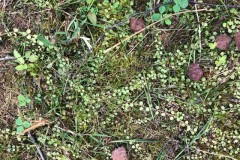 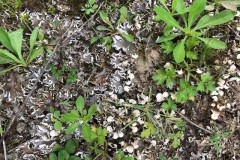 The group met at 2pm on Wadworth Hall Road, between the Community recreation ground and the 15th century Parish Church of St John the Baptist.

Pre-meeting observations: The Local Authority Culture, Leisure & Tourism staff had just completed mowing the sports field, presumably in readiness for a week end cricket match. The outfield had been strimmed and the cricket square immaculately close-mown and taped off to prevent damage. Interestingly the recent mowing had disturbed many flying insects which in turn had attracted 5+ Swallows Hirundo rustica which in the strong westerly wind were hawking close to the ground. 3 Pied Wagtails Motacilla alba were focussed on Cricket square, hunting on foot, picking insects off by making their characteristic short dashing runs. Despite the differing hunting techniques of the two species, the Swallows made persistent and prolonged aerial attacks on the wagtails, attempting to drive them away from this temporary food resource.

The west-facing limestone wall of the extensive churchyard was interesting in hosting numerous clumps of the evergreen fern Wall Rue Asplenium ruta-muraria, 146 clumps, together with 1 Hart’s-tongue Fern Asplenium scolopendrium were counted growing out of the lime mortar.

The group proceeded to the shrubbery along Wadworth Hall Lane, observing the flora of the substantial limestone garden walls of the properties en-route. Populations of Wall rue was a regular feature, though at one property the front wall was graced with swags of Ivy-leaved Toadflax Cymbalaria muralis and a population of Hart’s –tongue Fern with ornate ‘pinnate’ leaf tips.

We entered ‘The Shrubbery’ at the eastern gate and proceeded along the upper path with the boundary hedgerow on our left and the steeply sloping woodland floor to our right, emerging onto the mown verge at the top of Tofield Lane. We then returned via the lower path encountering the surviving sections of the retaining ‘Ha-ha’ wall, the ‘Gospell Well’ and finally the pond at the site’s north-eastern corner.

The entomology of the water course emanating from the ‘Gospel Well’ and conducted to the pond would repay further investigation. The associated stonework could also provide additional bryophyte (mosses & liverworts) records.

The low Magnesian Limestone retaining wall of dressed limestone blocks with its rounded cap stones which forms the ‘ha-ha’, is presumably a feature of the landscaping of the grounds, gardens and walks of Wadworth Hall, constructed in the 1760s by the celebrated architect James Paine.

‘Ha-ha’s’ (usually on elevated sites and based on steeply descending land forms terminating in a stout retaining wall) were constructed to provide an invisible barrier a) to prevent grazing livestock from entering gardens, lawns or woods used by the promenading gentry and b) to provide the said gentry with unobscured views over the surrounding landscape.
Today the adjacent land is not grazed but under arable management and the predominant landscape features are traffic jams on the A1(M) the M18 and the silver glinting roofs of the expanding population of ‘logistics’ warehousing.

The afternoon was rounded off by a visit conducted by Mike Oliver to the churchyard of Wadworth Parish Church. The flora was influenced by the prevailing mag. limestone soil type but sadly the more species rich area had been mown so the full complement of species was not revealed. However the presence of Hoary Plantain, Bird’s-foot trefoil Lotus corniculatus, Glaucous Sedge Carex flacca, Knapweed Centaurea nigra, Sorrel Rumex acetosa and Lady’s Bedstraw Galium verum was indicative of the biodiversity of the habitat.
Whilst admiring the architectural styles of the church we noticed growing from the capping stones of north aisle were four plants of the elegant Maidenhair Fern Asplenium trichomanes, enterprisingly identified with the help of June’s binoculars and Jim’s flora. The all-knowing Mr Oliver then showed us a neighbouring site for this species, growing from the lime mortar of the upper course of an uncharacteristically red brick wall. Evidence that a bird of prey had once roosted above one of the east windows was a cache of long bones of a Starling-sized bird. The final tick of the day was a circling Red Admiral Vanessa atalanta.

The following list was compiled from notebook entries made on the visit of the Doncaster Naturalists’ Society on the afternoon of Friday 13th August 2021.