The meeting started at 1.30pm at the bridge in Wentbridge near the Wentbridge Hotel. We walked up the road until we came to a path on the left which took us on a path through woodland with the River Went to our left. The show of Wood Anemones was amazing, the woodland floor being carpeted with white Anemone flowers and the green of Wood Anemone leaves and Dog’s mercury. 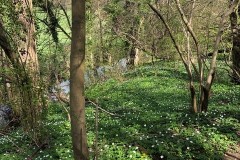 In several places we found the seedlings of Himalayan Balsam Impatiens glandulifera which is an an invasive species listed under Schedule 9 to the Wildlife and Countryside Act 1981 with respect to England and Wales. As such it is an offence to plant or otherwise allow the species to grow in the wild so Joyce took every opportunity to pull them up. 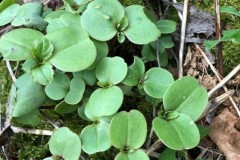 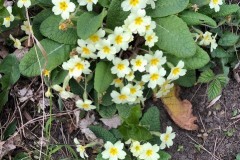 We carried on along the path until we reached a point in Brockadale where we could cross the river via a bridge and started to walk back to Wentbridge on the other side, making a detour down a lane where there was a banking covered in primroses and violets. By the time we got closer to where we had started the temperature had increased considerably and I for one was pleased to stop walking. It was a fantastic afternoon for our first walk after Lockdown both weatherwise and for the species we found.

Meeting Start Time: 7.30pm, Applehurst Railway Crossing.  The weather was bright and clear with a sunset at 8.15pm.  Becoming very chilly after dark (falling to 2 degrees Centigrade on departure from site at 11pm).

Attendees:  Leaders: Mick Townsend, Louise Hill, John Scott, Margaret and Jeff Prior, Caroline Barrass, Jim Burnett, & Thorpe Marsh Volunteers Janet Mansell and Barry Evans.  Colin Howes attempted to attend but got lost on route after missing road signs due to the dazzling low sun and arrived after the party had crossed the railway, so returned home ‘to a hot soup and a warm cat’!

Due to Covid 19 restrictions, the usual spring meeting had been delayed by several weeks.  The meeting was split into two groups due to outdoor meeting restrictions.

Water levels were generally good despite a lack of rain in the whole of April.  There were signs that the water levels in Applehurst Flash had begun to decrease (a tide mark on marginal vegetation).  The Mere was described as being at its highest level (outside flood periods). The grass of the meadows was short and contained a few cowslips.  A herd of lively cattle were grazing the fields adjoining Applehurst Flash and Lewis’s Pond and had evidently been into the pond.

Applehurst Flash: eleven folded leaves of Myosotis scorpioides and Epilobium sp. with newt eggs (one of which was not completely stuck down and was confirmed to be a Great Crested Newt egg).

A Greylag goose nest was found on the edge of the Flash and the surveyors retreated prevent further disturbance to the female goose, who was close by.

A snipe (?) was seen to fly up from the Flash and a pheasant flew over.

The water in Lewis’s Pond was cloudy due to the cattle trampling the margins.  No newts were seen and no eggs were found.

A frog or toad tadpole was seen at the edge of the pond through the fencing.  The entirety of the rest of the pond(s) surface was covered by a continuous scum of pollen from the overhanging willows and torchlight survey was impractical.  A couple of attempts at netting produced no results.

The scrape margin near the pond dipping platform and the nearby damp ditch was inspected.  Further search was undertaken by gently wading into the southern margin but no amphibians or pond life was seen.  There is now a large fish population in the scrape following inundation during recent flood events.

A male Tawny Owl was heard repeatedly calling from the woodland to the east of Applehurst Railway Crossing (SE594098) when waiting to cross the railway to leave the site.