Over forty different galls were discovered in the two sites which were explored during the day. The silk button Neuroterus numismalis and the common spangle N. quercusbaccarum were abundant on the underside of Oak leaves. There were also species of the smooth spangle N. albipes, similar to the common spangle but often white in colour and less hairy. We also saw a few examples of the aptly named cherry gall Cynips quercusfolii, a spherical gall on the underside of the Oak leaf, as large as a cherry, which is occasionally red in colour. Nora Boyle spotted some fine examples in Black Carr Plantation. This year the usually common oyster gall N. anthracinus which is attached to the leaf central vein has been rarely recorded but after careful searching we discovered some examples. A variety of galls were found on the Oak buds but none were common. The marble gall Andricus kollari was the most familiar and the smaller, rougher surfaced cola-nut gall A. lignicolus was spotted quite a few times. Some years the artichoke gall is common but not in 2020 however specimens were discovered. Ian Farmer spotted two examples of A. glandulae clustered together; these small bud galls are conical in shape with silky white hairs. He found a single example of A. malpighii , a small slightly elongated bud with five longitudinal ridges. There was discussion about another of his discoveries A. infectorius, possibly the first Yorkshire record. Ian’s photograph is on the front of the latest issue of the BPGS Journal Cecidology. Old examples of the ramshorn gall A. aries were discovered but eventually new galls were found. In recent years A. grossulariae has often been discovered galling acorn cups, but it can also gall buds. None were seen in King’s Wood, but there were a few examples discovered galling buds in Black Carr Plantation. 2019 was an abundant year for the knopper A. quercuscalicis galling the acorns. This year, fortunately for the regeneration of the Oaks, there were less galled acorns. Once members were introduced to tiny clusters of A. gemmeus, small yellowish, occasionally reddish, cone-like bumps found on buds arising from the bark, many examples were found. A fine example of the barnacle gall A. sieboldii was found near the base of a young sapling in Black Carr Plantation.

There were galls on the leaves of Beech. The edges of some leaves were slightly swollen and lighter in colour, indicating they had been galled by the mite Acalitus stenaspis. The small, hairy or smooth cylinder-like structure of Hartigiola annulipes was common on the upper surface while the sugary-like erineum, a mite structure caused by Aceria nervesequa , was visible on the lower surfaces. Sallows were often found on the edge of the wood. The small pimples of the midge galler Iteomyia capreae were abundant on some trees, and there were also the distinctive swellings of I. major and of the sawfly galler Pontania bridgmanii. A Walnut had green bulges on the upper leaf surface indicating the common mite gall A. erinea. Many leaves of an Elm species were covered in mite pimples caused by Aceria campestricola. The usually common galls on the leaves of Sycamore, the small red pimples, Aceria cephalonea and the erineum A. pseudoplatani on the lower surface took a while to find. In Black Carr Plantation there were a few examples of the uncommon midge gall Dasineura irregularis which had thickened and distorted the leaves of a Sycamore sapling. Ian Farmer had found this a few years ago. On Field Maple we found a few examples of Aceria macrochela and the common pimple gall A. myriadeum.

We investigated the smaller northern part of the King’s Wood between the A638 and the railway line. The most interesting discovery was on the footpath by the road. Red pimples formed by the mite Aceria artemisae were found on the leaves of Mugwort. I had recorded this gall in the same place in 2019. In the main woodland the hairy swelling of the midge gall Dasinuera urticae was seen a few times on Stinging Nettle, and there were distortions of the upper leaves caused by the mite Trioza urticae. Eventually on the leaves of Ground Ivy the lighthouse gall was spotted caused, by the gall wasp Liposthenes glechomae. Careful searches of the Rosebay Willowherb led to the discovery of the leaf roll caused by Dasineura kiefferiana. Large colonies of Bracken in Black Carr Plantation eventually led to the discovery of the Black Pudding gall, a shiny black roll on the underside of a pinnulet, and the tips of some leaves had been rolled by the midge Chirosia grossicauda. 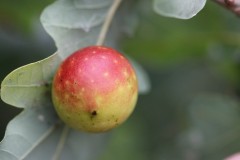 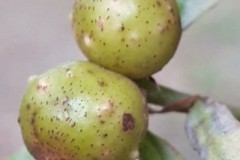 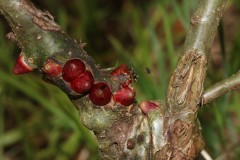 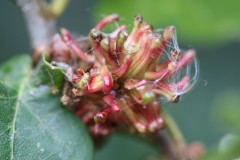 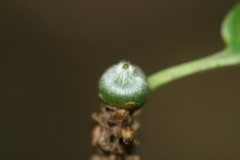 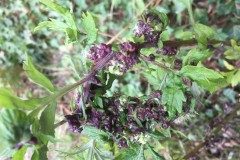 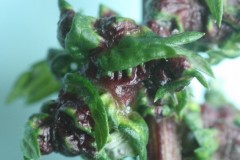 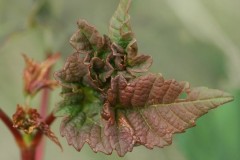 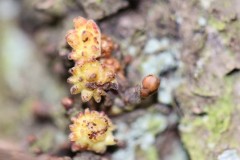 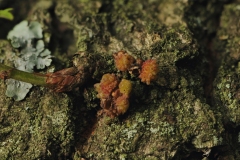 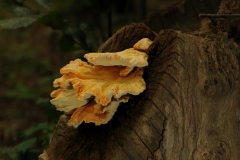 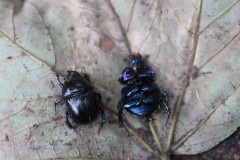 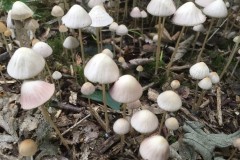