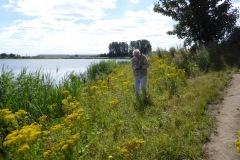 Potted history:
Bentley is situated at about 5m above sea level, in the floodplain of the river Don which meanders across the bed of the post-glacial Lake Humber. With progressively warming sea temperatures the North Sea continues to rise and the Don, which feeds into the Humber estuary, has become tidal up to the centre of Doncaster.
The etymology of the name Bentley derives from the terms “Bent” referring to a type of meadow grass (of the genus Agrostis) which still abounds in the area and the Anglo-Saxon “Ley” or ”Leigh” meaning a field, hence a grassy field or meadow.
In this lowland rural/agricultural landscape, a part of the estate of the Cookes of Wheatley Hall, Doncaster, the mining company of Barber, Walker & Co. based at Watnall and High Park in Nottinghamshire was invited to explore for coal. Several exploratory borehole were excavated in the late 19th century and again in 1902 and 03 and coal-bearing seams were encountered. Though geological difficulties such as quicksand and water were experienced, the main shaft was sunk in 1906 and coal production commenced in 1908.
Due to the small rural population, the colliery workforce was largely recruited from Nottinghamshire and elsewhere. By 1910 there were 1,000 employees, rising to just under 3,000 between 1933 and 1947. The mine closed in December 1993 with the loss of 450 jobs and huge coal reserves left underground.
The production statistics for the mine are difficult to trace or calculate but in one year, 1924 prior to mechanization, over 1,200,000 tonnes (1,300,000 tons) of coal was brought to the surface. It would be interesting to know how much coal was contributed to the economy by the miners at Bentley Colliery through its 85 years of production … where is all that carbon now?
All surface buildings, including the pit-head gear, were demolished by 1995 and in 1998 the site was made safe and transferred to The Land Trust. It was landscaped and managed as woodland in 2004 and is now open to the descendants of the Bentley Miners and the public at large as the Bentley Community Woodland.

Highlights of the visit:
Our preliminary visit, though relatively brief and incomplete, revealed the site to be potentially species-rich, a boon to Doncaster’s biodiversity and a remarkable local example of habitat creation. Notable species were Spiny Restharrow Ononis spinosa (found by Joyce Simmons) representing the only known modern Doncaster record. The only previous documented occurrence was on the limestone at Warmsworth, recorded in F.A. Lees’ Flora of West Yorkshire (1888). The scarce and declining Dyer’s Greenweed Genista tinctoria, which occurs in profusion adjacent to the Shaftholme lake, here probably represents the largest population in the Doncaster region. The occurrence of Marbled White Butterfly was a welcome expansion from limestone vale sites in the Don Gorge and Brockadale. The Essex Skipper butterfly, a recent immigrant from the south was very well represented and the gall wasp Andricus aries, which causes the impressive Ram’s-horn gall on terminal buds of Turkey Oak, was only discovered in Britain in Berkshire in 1997. It is now widespread through southern Britain and is now moving north.

Although records were constantly noted along our circuitous route, for convenience these have been aggregated into the following 11 recording sites. Records are arranged into Table 1 (Zoology) and Table 2 (Botany).

Table 2: Flowering Plants & Ferns. List in alphabetical order of the botanical names from each of the recording areas (see above) along our route.

Birds: Chiffchaff; Dunnock
Mammals: Mole [hills]
Plant Galls: The rolled edges of Ash leaves were caused by the Psyllid bug Psyllopsis fraxini. The rolled leaves of Cleavers [Goose-grass] were cause by a Gall Mite of the genus Cecidophyes either C. rouhollahi or C. galii.

Note. The South Yorkshire Plant Atlas only has 8 sites listed,  including just 1 for the Doncaster region. “A robust and vigorous species of waste ground, roadsides, marginal land and disused railway land but scattered and infrequent”.

Though a gloomy and showery day, the turnout was enthusiastic and delighted to see and be shown such a wealth of species.