Dedication:
The late Albert Wright worked down Brodsworth Pit and lived in one of the ‘Model Village’ colliery houses that backed onto the Roman Ridge. He had been a member of the Doncaster Naturalists’ Society in the 1960s and 70s (and probably earlier) and was an active member of the YNU Ento. section. He would also have been delighted with the Brodsworth Community Woodland development.

Long ago on a DNS visit to the Roman Ridge we called in to see Albert and he showed us round his fascinating back garden. Whereas his proud neighbours would have prize Begonias or Chrysanths, the Wright garden was full of shrubs grown as food plants for Lepidoptera larvae. Colonies of munching larvae were protected from birds and insect parasites with linen bags … all flying like Buddhist prayer flags. The resultant high survival numbers of adults were ultimately released into the wild. In his flower beds he also had a number of boxes with inspection lids and access tubes which to our surprise and delight were occupied by bumble bee colonies.

Albert (very definitely an example of what the Victorians referred to as a ‘working man naturalist’) regularly corresponded with and supplied specimens to the legendary Miriam Rothschild for her Lepidoptera research.

Potted history: (largely according to Wikipedia)
Brodsworth Colliery was established in 1905 when two shafts were sunk between October 1905 and 1907 in a joint venture by the Hickleton Main Colliery Company and the Staveley Coal and Iron Company. The colliery exploited the coal seams of South Yorkshire including the Barnsley seam which was reached at a depth of 595 yards and was up to 9 feet thick. After a third shaft was sunk in 1923, Brodsworth, the largest colliery in Yorkshire, had the highest output of any three-shaft colliery in Britain.
In 1937 Brodsworth was merged with five other local collieries to form ‘Doncaster Amalgamated Collieries’. It was taken over by the National Coal Board in 1947 and finally closed in 1990
The colliery was consistently amongst those that employed the most miners in Britain, employing around 2,800 workers throughout the 1980s.
The original company built Woodlands, a model village, for its workers.
Since the colliery closed, its spoil tip has been restored and developed as community woodland; owned by the Land Restoration Trust and controlled by the Forestry Commission.
Some of the colliery site has been sufficiently remediated to allow houses to be built upon it. Currently work is proceeding on the 342 home Keepmoat Homes ‘Skylarks Grange’ development.

The Coral-necklace Illecebrum verticillatum Brodsworth’s botanical conundrum:
A population of this exceedingly rare plant was first noticed at Brodsworth on colliery waste between the railway tracks at the colliery sidings (SE528075 and 530075) in July 1987 by Ian Mcdonald of the Doncaster Naturalists’ Society. Ian worked for British Rail on railway signalling and track maintenance. He was therefore able to gain access to active industrial sites from which the rest of us were normally prohibited.

After the colliery closed in 1990, the railway sidings were removed and the site was ‘landscaped’. It is now part of the green and pleasant ‘Brodsworth Community Woodland’.

Sadly, despite notifying the ‘powers that be’ and the consultants ‘restoring’ the site, the Illicebrum area was bulldozed, commercially top-soiled and seeded and the plant hasn’t been seen since despite several searches.

Although the Brodsworth site is on the crest of the calcareous Magnesian Limestone ridge, the actual substrate was colliery waste and was probably rather acidic … probably not unlike the ‘railway clinker’ at its site in West Cornwall.

This record was additional to Dr David Pearman’s meticulous paper on the history and distribution of Illecebrum in Britain (Watsonia 27:143-148 (2008) though its ‘dot’ appears in the maps of the New Atlas of the British and Irish Flora (Preston, CD., Pearman, DA., & Dines, TD. 2002).

Records were constantly noted along our circuitous route (all within SE5207). These have been aggregated into Table 1 (Zoology) and Table 2 (Botany).

Table 2: Flowering Plants & Ferns. List in alphabetical order of the botanical names
SE5207 recorded during the Nats visit & SE5206 recorded during a brief visit by CAH 30.08.2020

Background: The lowland Humberhead parishes situated to the east of the A19 Doncaster/Selby road and sandwiched between the lower reaches of the River Went and the tidal Don are noteworthy for their ‘fossil’ landscape of green lanes, wet ditches field ponds and patchwork of tiny, thickly hedged often corrugated ‘ridge and furrow’ fields, many managed as pasture and species-rich hay meadows. The adjacent parishes of Fishlake and Sykehouse probably remain the best survivals of this extremely rare form of lowland rural landscape anywhere in the Yorkshire and Humber region.

Despite being in a remarkably well hedged and species-rich region, in the early 2000s the hedgerows of Fen Carr in the parish of Fishlake were evidently showing some deterioration. In August 2004 a survey report contained the following comments –

“A species poor defunct hedge with various standards throughout …The hedge is principally dominated by hawthorn and is in poor condition with many breaks in its continuity.”

However, the same report also beneficially mentioned the presence of oaks and ash in excess of 100 years old with rot and woodpecker holes.

Since the site’s acquisition by the YWT the hedgerows have evidently benefitted from conservation management such as planting up gaps with young shrubs protected by tree guards and the installation of fencing to prevent stock from eating out young growth from the hedge bottom. There have also been efforts to thicken lengths of boundary by hedge-laying. These measures have worked well and the hedges have improved considerably.

Methods: Using a Highways Engineer Surveying Wheel the seven boundary hedgerows of the two fields were divided into 30m survey samples (gateways and access gaps were not included). These were surveyed by counting in each measured sample
a) the species* of woody trees, shrubs and climbers and
b) the species of non-woody shrubs and climbers.
The results are shown in Tables 1 to 7 and reviewed in Figures 1 and 2. 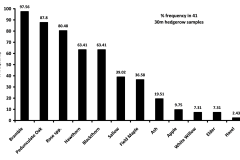 Figure 1: % frequency of taxa of woody trees, shrubs and climbers in 41 x 30m hedgerow samples.
[Click on image to expand]

Species frequency per 30m sample ranged from 3 to 8, the most frequent being 5 and the mean for the whole site being 5.21. The Eastern hedge had a mean frequency per sample of 5.36, the central hedge 5.18 and the western hedge 4.91. 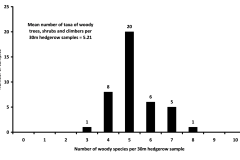 Figure 2: Numbers of taxa of woody trees, shrubs and climbers in 41 30m hedgerow samples.
[Click on image to expand]

Discussion and Comments:
(Species frequency) The 1982 survey of 678 hedgerows throughout the parish of Fishlake (unpublished manuscript in Doncaster Museum) showed species frequencies ranging from 1 to 8 with a mean frequency of 2.86 per sample (see table A).

Since Hooper’s rule asserts that the number of woody species in a hedge can be a function of its age, with an average of one additional species recruited per century. For a landscape largely set out in 1825 the mean species frequency of 2.86 per 30m sample would be about right, the higher frequencies occurring in much older pre enclosure hedgerows such as along older highways and parish boundaries.

Why the mean species frequency at Fen Carr should be so much higher (at 5.21) than the parish average is a puzzle though the site abuts onto the Fishlake/Sykehouse parish boundary and the local occurrence of ancient place-names (Fen, Carr and Hague) suggests evidence of its being part of a much older landscape.

(Species comments)
Apple. Although wild crab apple had been expected to occur, in fact the three Malus samples were identified as cultivated M domesticus. An examination of large scale pre-war Ordnance Survey sheets for the Fishlake region reveals a number of orchards associated with local settlements and farmsteads. Fruit was extensively grown indeed one named apple variety, the ‘Sykehouse Russet’ originated locally (see YNU Bulletin (2004) 42: 18-21)). It is likely that the Fen Carr apples grew from the discarded cores of apples from the ‘snap tins’ of agricultural workers working (? hedging and ditching) on site.

Blackthorn. is a prominent component of local hedgerows, producing a bumper crop of sloes in 2020 as witnessed during our survey. Its distribution, however, varied considerably occurring in over 99% of samples in both eastern and central hedgerows but dropping to 16% in the wetter western hedge. Since Blackthorn was making significant encroachment, particularly into the eastern meadow, this needs to be controlled by mowing in future years.

White Willows. Though statistically insignificant, occurring in only 7.3% of samples, the Fen Carr White Willows, like cathedral spires, form magnificent and iconic landscape features. Formerly a major feature of the local parishes, sadly these are being lost from the landscape. Once regularly pollarded for timber products, this is no longer the case; most that are left are reaching senescence, collapsing and being removed for safety or for agricultural convenience. It has been suggested that promoting coppice timber as a carbon neutral fuel may provide a commercial future for the local white willow stock.

Spurge Laurel. is better known as an understory species of limestone woodlands such as those at Wadworth Woods and in the Don Gorge. In the Fishlake and Sykehouse parishes it is a curiosity occurring uncommonly under the canopies of Parish boundary and Green Lane hedges. At Fenn Carr, plants occur in each of the southern hedges facing Carr Head Lane and an adjacent section of the eastern boundary hedge. In high summer it was only possible to count five separate plants but a winter survey of these and hedgerows and adjacent green lane networks would be useful to determine the size and distribution of this curious population.